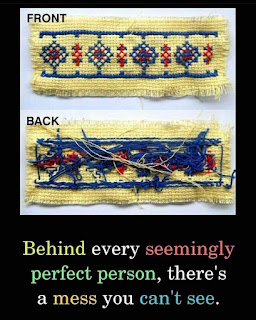 I worked with many staff members and kids over the years. 46 years, to be exact. In my various positions, I’ve heard many stories. Happy. Sad. Tragic. Hopeful. Despondent. Loving. When I think I’ve heard it all, I’m astounded to find yet another story I hadn’t heard.

Eileen, a teacher, had a son who died. Seemingly normal one day, then went downhill slowly at first, only to reach his end in a rapid and unexpected fashion. To look at her, to interact with her, to watch her with colleagues and kids, one would never know she struggled daily, sometimes hour by hour.

I remember one day, she stopped in my office and asked if she could just sit a minute. “Of course,” I said, “Yes. No problem!” I told her. “Take as much time as you need.” She apologized with a sad smile and said she would only need a minute or two. After a few minutes, she thanked me and went on her way. I checked on her later in the day, and she smiled and said, “I just needed a moment. Thank you.”

Nina’s husband passed away after a long medical fight. Nina is a counselor. She knew how to take care of herself, yet we made sure to discreetly watch over her. I would check in with her often, asking how she was doing and if she needed anything. She cared for the kids on her caseload, her own two sons, and herself without showing how much she was hurting.

At one of my schools as a counselor, a young man, Ricardo, witnessed a gang execution and testified against the shooter. Ricardo’s parents moved him to a different school, my school, to keep him safe. But my fellow counselors and I, and our supervising assistant principal, wondered how safe he really was. You see, the gang member who committed the execution had tentacles in our school, too. It was only a matter of time before they found him.

Ricardo went to school. He worked in the classroom. His grades were above average, and in some classes, way above average. Quiet and shy, Ricardo was nervous, but smiled. He knew what we knew. It was only a matter of time. He lived with that fear. The year ended, and Ricardo moved again. I lost track of him, and to this day, I don’t know what happened or if anything happened to him.

Three stories of three different people. Something tragic and ugly happened in their lives, and they coped as best they could each day, each moment.

In July 2014, our son was shot and killed as he walked home from lunch and a bit of shopping. Approximately two blocks from his new apartment, one gang recognized a rival on the street walking just ahead of Wil. A fifteen-year-old was handed a gun and was told, “Go wet his shirt.” He and a companion got out of a car and followed the rival.

The rival spotted the tail, saw the gun, and used our son, Hannah’s and Emily’s brother, as a shield. Wil was struck once in the back and died. Ten shots were fired and one shot hit someone. That someone was Wil, an unintended victim of collateral damage.

Kim and I, our daughters Hannah and Emily, and Wil’s young wife, Maria, learned to exist. We had a celebration of life, and after, we came back home and went on with our lives. We went about our day. I was a principal, Kim a teacher, Hannah a student in college, and Emily a student in high school. To watch us each day, we did the best we could. We smiled often. We kept ourselves busy. We worked hard to not let anyone know the pain we went through.

Emily played soccer and did the things a normal junior in high school would do. Her friends watched out for her. Hannah was away at school. She pulled good grades and eventually graduated and is now a teacher. Kim and I talk often about that time and that year, and neither one of us can remember much about that school year. It is like there is a hole in our lives. A lost year in many respects.

I mention these people and I mention what happened to our family because often and every day, there are people around us who interact with us, who smile and laugh, and we think, “They have it together. They are doing so well.” In reality, they, like we and the people I mentioned in this post, were just hanging on. We lived day by day, and sometimes, moment by moment. We tried to not let others see what was happening to us, how “life” was eating us up and spitting us out.

I ask that this day, and every day, we remember that our actions, our words, can have either a positive or a negative impact. What we say or do can mean the difference between someone doing well or someone crashing and burning. Our words and our actions have power to heal or to hurt. I hope we will do our very best to heal where and when we can. I hope we will do our best to be kind any way we can, as often as we can. Please. Something to think about . . .

Live Your Life, and Make A Difference! (Please!)

If you have read one of my books, I would like to ask a favor. If you could go online and write a review or, at the least, give a rating on the book, it would be of great help. Both a review and a rating would be wonderful. The review could be one or two lines. It doesn’t have to be long. Just let others know you read it, and hopefully, enjoyed it. Obviously, 4s and 5s are the best. Thanks for this consideration.