A Bucket of Balls 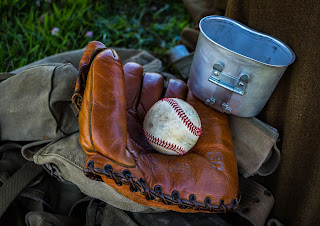 There was a story I came across this week watching the news. It was one of the few uplifting stories left on nightly news shows, and it was saved until the end of the broadcast. Thankfully. Something nice to savor.

An elderly man had cleaned out his garage and came across a bucket of baseballs. It stirred up any number of fond memories for the guy. You see, he used to throw hours and hours of batting practice to his son and eventually, his grandson. He coached them in games. Played catch with them in the yard. Great times for him and for them.

But as families do, kids grow up and have kids of their own. They move away. Time and distance sometimes separate that bond and what is left are just memories.

The man, Randy Long, decided that he couldn’t throw the bucket of balls away. Instead, he took it to a batting cage and left it with a note for someone to find. In part, the note read:

"Hope someone can use some of these baseballs. I pitched them to my son and grandson for countless rounds."

Randy Long went on to say that his family is now grown and gone — but what he wouldn't "give to pitch a couple of buckets to them.  If you are a father, cherish these times."

Sad, isn’t it? Something so endearing, so precious to one, becomes just a bucket of balls to another.

This story, however, has a happy ending.

This past week, Brian and his wife, Stormy, and their son, Carter, met Randy Long at a local park. Brian and Stormy explained that Carter’s grandfathers died when Carter was young and he never had the opportunity to have his grandfathers sit in the stands and watch him play. They invited Randy to one of Carter’s games. During that visit, Randy asked Carter if he wanted to play catch and they did.

For us, there is a bit of pride along with the pain.

My daughter, Em, no longer plays soccer. Kim and I watched our kids play for twenty-six years. First Wil, then Hannah, and then Emily. Every year, every season. Em graduated from college and that was the end of that for Kim and for me. I had joked to some friends that she and I would have to adopt another kid or two so we could watch some more soccer.

I received a message from a parent letting me know that his son and a bunch of kids from my high school (I am retired) were playing a game and he thought the boys would love to have me come out and watch them. So, I did. I stood on the sidelines and watched with pride. Several of the boys came over during and after the game to say hello and thank me for coming. I was asked to have my picture taken with them after the game.

For me, I got to watch soccer again. Those young men mean something to me. I got to relive a moment or two. Just like it was for Randy Long and now for Carter, it was nice ending for me. For Randy Long, his baseball game went into extra innings. Who knows if or when it will end, but for the time being, Randy and Carter are playing some baseball. And, at least here and there, I get to watch some soccer. Not quite ready to close that chapter. Not yet. Something to think about . . .

To My Readers:
Connect with me on Social Media:
Twitter at @jrlewisauthor
Facebook at: https://www.facebook.com/Joseph.Lewis.Author
Amazon at: http://www.amazon.com/Joseph-Lewis/e/B01FWB9AOI /
Betrayed is now available for Kindle preorder to KDP Select at Amazon at: https://amazon.com/dp/B08GCTV2XH  and it is also available in print at:https://blackrosewriting.com/thrillers/betrayed
A late-night phone call, a missing kid, a murdered family, and no one is talking.