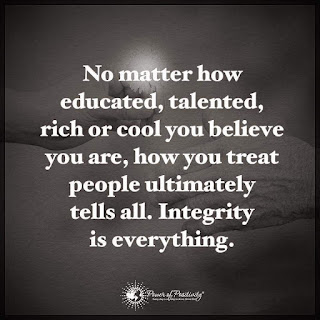 I was thinking this past week about the number of times I’ve screwed up. Big or small, there have been way too many to count, both in the past and in the present.

It’s easy for me to apologize. I truly mean it when I say to someone that I’m sorry. I don’t like hurting others and I don’t like it when people, especially those in positions of authority hurt others. There have been times when I’ve been cautioned about apologizing for things that were not my fault or things I didn’t do, but I believe I have some culpability in what was done or said. It happened on my watch. I hate this phrase, but at times – even though it is hard to swallow – the buck stops with me.

Sometimes my “humor” gets in the way and it can sting. I don’t mean to cause hurt, but sometimes . . . most times . . . sarcasm hurts. The joke is at someone’s expense. It isn’t called for and at the heart of it, it is mean and unkind.

What is perhaps the hardest for me is when someone says or does something to or about one of my kids or someone close to me. My anger flares up. It lasts. Some hurts have lasted years.

There was a teacher who refused to follow my son’s accommodations. Refused. Wil had a reading problem. What ended up in his head sometimes didn’t make it to the pen and paper. Many times, what he read, he didn’t understand. He battled learning English. You see, his native tongue is Spanish (we adopted him from Guatemala when he was seven), though he was illiterate in that language because of never attending school before we adopted him. The teacher felt that by providing him with a “book,” (not just a reading book, but a large text) he could then read it and understand it on his own.

A learning disability didn’t and doesn’t work that way.

It took me a long time to forgive, though I have never really forgotten it.

One teacher told me that my daughter “wouldn’t get by in life with her cutesy smile and by batting her eyes.” He repeated that and other unkind things behind her back to her classmates. Some of her friends defended her, but the teacher didn’t seem to care. She didn’t deserve this. Aside from being unprofessional, it was unkind and unjust.

Just two examples, and I’m not illustrating them to badmouth the teachers. Teachers have enough on their plate, especially in this day and age. The demands on them are burdensome. No matter how many years one has taught, this is everyone’s first year because of virtual learning, the technology involved, and teaching in isolation.

The point I’m trying to make is that these two examples took place years ago. I’ve not gotten over them. As a dad, one of my jobs is to protect them, teach them, mentor and nurture them. I take this responsibility seriously.

But I cannot help but feel that at times, my inability to forgive negates my kindness, my compassion that I bestow on others. Sometimes, my inability to forgive negates the good I’ve done to or for others. Looking at it through a religious lens, if God or Jesus can forgive what I’ve done or not done, said or didn’t say, who am I to not forgive those who have wronged me or my family or my loved ones? How can He forgive me if I choose to not forgive others?

Lastly, holding onto a grudge is burdensome. It takes precious time and energy that can be best spent lifting yourself and others. Truly, I’ve wasted enough time and too many days (months, years) not forgiving. While I am not perfect – I’ve demonstrated that over and over again – it’s time I put my heart where my mouth is. Though hard, though seemingly impossible, I, and perhaps, we, need to forgive. Not only for the good of others, but for our own good, our own health both mental and physical. We need to work on it. We need to forgive. Something to think about . . .

To My Readers:
Connect with me on Social Media:
Twitter at @jrlewisauthor
Facebook at: https://www.facebook.com/Joseph.Lewis.Author
Amazon at: http://www.amazon.com/Joseph-Lewis/e/B01FWB9AOI /
Betrayed is now available for Kindle preorder to KDP Select at Amazon at:
https://amazon.com/dp/B08GCTV2XH and it is also available in print at: https://blackrosewriting.com/thrillers/betrayed
A late-night phone call, a missing kid, a murdered family, and no one is talking.

Photos Courtesy of Power of Positivity.