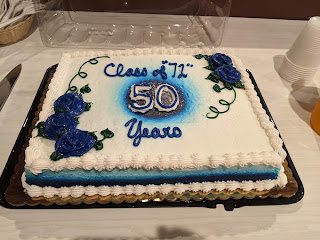 Yet for those of us who attended, it was a nice, relaxing time. Bittersweet, really.

Funny thing about memories and the pictures in one’s head from 50 years ago. I honestly didn’t recognize many. I had to read their nametags. Played football with several. Herb and I shared the backfield together. Ran track together. Herb had this carefree, daring persona about him all the way through high school. One of the toughest guys I remember.

One of the memories shared- that I had forgotten about was how Herb would scale the gym walls and beams. I know he wouldn’t, couldn’t do that now. Another story was that somehow, Herb had gotten onto the roof of the church and, with help from the building across the road, hung up a banner for our graduation. Don’t know how I forgot that.

Dang, we’re old. Some of us have hair, some not. Some in really good shape, some not.

Some of my classmates had their share of illness. Some still battling, and in at least one case, it doesn’t look like he might win the battle. He shared with me he knows, and as he shared that with me, his wife nodded. Sad. It left me to wonder how many others are winning, or losing their battles.

On a tour we took of our school (it was a co-ed boarding school that was once a seminary), we stopped at the cemetery on the campus. Some of the buried were my teachers- priests, brothers, nuns. All were members of the Salvatorian Order and Society. Some so old, their names are almost smoothed off the grave marker. Others, recent. The dirt on their grave still visible, even with grass grown over it.

The football field- the bowl, as we called it, now filled with water for a pool. Several buildings were gone. Burned to the ground or removed. Others boarded up with windows broken, doors locked or chained shut because of old age and disrepair. Would have loved to have gone in those buildings just to see, to remember, to revisit. Freshen the memories, if that was possible.

In looking at and visiting with my classmates and schoolmates, I was surprised at the paths some of them took. Dan was my guitarist throughout our four years. Man, he could play. Finger picked most everything. He could read sheet music or play by ear. I figured he was LA or Nashville bound. Nope. He got into finance and accounting. Would never have guessed. Pete, two classes older than mine, is a municipal judge. Joe, two or three classes younger than me, is retired and had worked in a paper mill. Pete, retired, worked in hospital administration after a stint in Vietnam and the Navy. Josh, one of the smartest guys in my class, a postal worker. John, a doctor/professor, still teaching family medicine for a medical college. Several farmers. Another John works in HR for the UW system.

I was asked if back then, that I would have ever thought I’d have one book published, let alone eight. Nope, not a chance. I had always loved to read. But to write? Hmmm, nope. Honestly, I didn’t even know I’d be in education for 47 years and counting, though now, only part-time. But me a principal? Back then, never would have considered it. Never imagined it.

I don’t know many seniors in high school who figured out their life plan and path as they walked across the stage to pick up their diploma. My wife might have been an exception. She knew in third or fourth grade she wanted to be a PE teacher. She still is.

What I didn’t hear, though I imagine there were thoughts bouncing around the recesses of the minds of the attendees, were regrets. I didn’t hear any if-I-could-have-should-have-would-haves. Nor should I have heard any. All of us successful, seemingly happy. As it should be. A life well lived. Some with grandkids, others not. We ran the race and are approaching the finish line. Will receive the wreath of victory one day, hopefully not too soon. Too much to do, things to see, people to love. And hopefully, each of us will finish strong. Some will even have the kick of a sprinter or long-distance runner as we approach the finish line. That would be nice, wouldn’t it? Something to think about …

If you head over to my author website at www.jrlewisauthor.blog/ you will find the cover and book blurb to my newest book, Fan Mail along with another short story. I should have it up and running either yet today or tomorrow early. The short story is titled The School that is a take on the high school I graduated from. The theme fits our spooky season.

While you wait for Fan Mail to hit March 30, 2023, I hope you take the time to enjoy my other work. The last four books have won thirteen awards, while my Lives Trilogy has won two.