In Service to Others 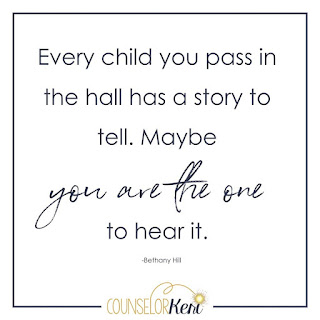 Our daughter, Hannah, came for a visit this past weekend. She is a third grade teacher in a district south of us and has been teaching for four or five years now. My wife and I knew she’d end up being a teacher, even though she tried different majors while in college. It is her calling, and we saw it from little on.

Her class is mostly made up of non-English speaking students, and some who are below grade level. The school draws from lower income neighborhoods, and her work is hard, but she loves it.

Over dinner, she told us a story about one of her former students, now in fourth grade. Each day, he seeks Hannah out for a hello and a hug. At the end of the day, he is reluctant to leave, wanting to be with her. Not atypical for some kids to connect with teachers. As a principal, I preached that if a student connects with one caring and interested adult, the chances of success for that student multiple tremendously.

This little guy has had a tough go of it. His mother died last year, and he lives with his father, and a sister who is out of school. Both his father and his sister work long, long hours, and this little guy goes home to an empty house most days. He gets his own dinner and puts himself to bed- alone. No one to say goodnight to. No one to read him a story. No one to listen to how his day went. This little guy is only nine years old.

Our youngest daughter, Emily, is in her first year as a clinical social worker and a therapist at a nonprofit. She sees a variety of adult clients and works through their problems with them. She guides, coaches, and leads, but doesn’t preach at them or tell them what to do.

When she worked with the homeless population, helping them obtain living arrangements, medical care, and sometimes providing a path to psychiatric care, she had many funny stories. Like the one man who played a game of cards with several individuals- who weren’t actually visible or there. Like the guy who “shadow boxed” his way ahead of Em and her partner in an effort to “protect them” from unseen individuals, again, who weren’t there. At least Em and her partner didn’t see them, but the guy sure did.

Some days, she was frustrated with “the system” because of the hoops she and her clients had to jump through to get the help they needed. She would call and vent, and in the end, her stock answer to all might be, “People are stupid!” And she’d say it with a laugh.

I could go on and on about teachers helping kids, about my niece who is a 9-1-1 operator helping individuals in immediate crisis, about administrators working to cut tape and clear out the obstacles so kids and teachers can get the services they need. In my 47 years, I think I’ve forgotten more stories than I remember.

But I realized then, as I do now, that teachers, administrators, therapists, and other health and helping care workers are loving their clients. They do what they do because at the core of their belief is that kids and people are worth it. They work in service to others. They care. They love.

To me, service to others is loving others. Yes, we get paid for what we do. (Not nearly enough, however). There are so many long hours, some sleepless nights- all because these caring individuals love others enough to work on their behalf. They give- many times much more than they receive. These selfless and caring, compassionate and loving individuals do what they do in service to others because they love others. And isn’t that what we are called to do? Something to think about …

I have fantastic news!

My newest book, Fan Mail, is Available for Preorder at https://www.blackrosewriting.com/thrillers/fanmail  Use code PREORDER2023 to receive a 15% Discount. If you head over to my author website at www.jrlewisauthor.blog/ you will find the cover and book blurb to Fan Mail.