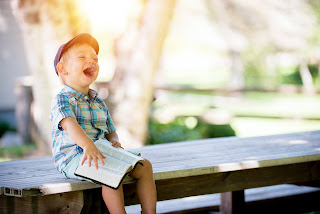 When I was a principal, one of the administrative assistants had the best laugh! Actually, I’ve been blessed with administrative assistants who had great laughs. Anna, who is now deceased and who I miss dearly, was one of them. Dona, Wendy, Sherrie, Val, Chrissy, many others – all of them made me laugh when I heard them laughing. They made the offices they worked in fun to be in. A joyful place to be in.

When there was a birthday, we’d gather and celebrate and, of course, sing the birthday song to whomever it was we celebrated that day. It was Alicia who said, “I don’t sing! I make joyful noise!”

Remember when you’d go to your son’s or daughter’s preschool or early elementary school concerts? There were times when the kids would belt it out and, usually, it would be sung in several different keys at the same time. Didn’t know that was possible, but it made me smile each time, just like it makes me smile as I write this.

One Christmas Eve way back, I visited my sister, Betty and her husband, Jim, and my niece and goddaughter, Nadine. We went to one of the later services and a children’s choir sang, Go Tell It On The Mountain. Two boys in the front row got so into it, they created their own hand and arm motions to go with it. The audience snickered along with the priest. But he was so taken with the performance, he asked the choir to do it again. So we all sang along, and the two boys got even more animated as they sang. It was the best service I had ever been to! So much joy!

But it doesn’t even need to be singing.

When Hannah and Emily come home with Alex and Q, we play board and card games. There is so much laughter and teasing and taunting. All in fun. All good-natured. And the decibel level climbs as the competition increases. Not that the Lewis family could ever claim to be competitive. Ha! But again, it is Joyful Noise, and I wouldn’t have it any other way.

Back when we’d take road trips and Emily and Hannah were in the backseat, they’d sing along with the radio. Although, I wouldn’t necessarily characterize it as singing. More shouting, along with hand and arm motions, almost dancing in their seats. And oh, was it loud! But Kim and I would laugh, and I’d struggle to stay between the lines because I watched them using the rearview mirror.

I think the best is a baby’s laughter. The giggle and belly laugh. Or, the individual who, when they’d laugh, you automatically smile and laugh with them. Can’t be helped.

During the year or two we wore masks because of Covid, one of the things I think I missed the most was seeing someone’s smile. The warmth of it. The humanness of it. The vulnerability of it. The invitation and message the smile gives.

My newest book, Fan Mail, is Available for Preorder at https://www.blackrosewriting.com/thrillers/fanmail  Use code PREORDER2023 to receive a 15% Discount. If you head over to my author website at www.jrlewisauthor.blog/ you will find the cover to Fan Mail, along with the first chapter or two to preview.