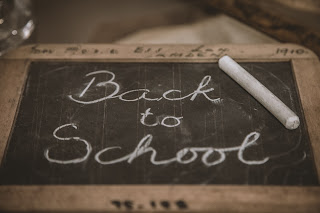 Welcome letters have been sent. Moms and Dads walk the aisles of Walmart and Target alongside eager kids seeking supplies for the year. My wife has worked this summer putting together an online course for seventh graders. And I’m pecking away on my laptop thinking about the first day of my 47th year in education.

A long time for many, but I can think of at least two teachers who have me beat. One is a substitute now, while the other is still teaching English. I’m only part time, which means thirty hours a week. Have to keep it at or under 30 because I am “officially retired” in the eyes of the state. Yet, I just renewed my license for another ten years, so …

A lot has changed in education since I started back in 1976. I developed two courses based on behavioral objectives. Was big on Bloom’s Taxonomy back then. Still am, I guess. Huge on reading and writing, even in social studies and psychology- my field of study and teaching.

Back then in Wyoming, a common practice was “paddling” a student for disciplinary measures. The principal did the application, while I had to be a second set of eyes on more than one occasion. Have to admit I shut my eyes and tried not to hear the whack and sudden gasp of breath, and tried not to see the tears. Demeaning on many levels. Hell, I don’t think Kim nor I ever spanked our kids. Just couldn’t bring ourselves to do that.

Was a coach back then. Basketball and football, though basketball was where I made my mark. Or I should say, the kids made my mark. I was more of a motivator than a coach. Hung up the whistle after ten or so years. Tired of it. All time consuming. Became a year-round job. I was looking to settle down. Thought of marriage and having kids, though it was several years before that actually happened. Fortunate it did. Happy it did. I love my wife, my kids, and my life.

I am an online learning facilitator. I don’t know if that’s an official title or one I made up. Whatever, it fits what I do. I help kids who use a learning platform for their course. A lot like monitoring a study hall, but kids are busy working. I’m there to help if help is needed. Not much interaction, though I like to tease them and a few will tease me back.

A teacher, coach, counselor, administrator, back to teaching once again. Grew up in Wisconsin. Lived in Wyoming, Nebraska, and California. Met Kim in California, though she too, was from Wisconsin, growing up only ten miles from where I went to high school. Didn’t know her until we ended up on the same campus. I was a counselor. She was a PE and health teacher and head softball coach. This summer, we celebrated 30 years together.

We talk about what we might have done differently, given the chance. Only things we come up with and talk about is getting married sooner and never leaving California. Loved it there. But we wanted to be nearer to our families.

A lot has changed. A lot is still the same. I’m quieter now. Move a bit slower. No longer an administrator, I don’t have to make decisions. Thankful about that. Don’t have to deal with paperwork or politics- my least two favorite things about teaching and education. I smile more. I’m happier now. Much happier. Thankful, actually. Hell, it only took 47 years to get there! Something to think about …

My ninth book, Fan Mail, has been accepted by my publisher, Black Rose Writing. The publication date is March 30, 2023. I am so pleased with this book. It differs from my other work in that it is a coming-of-age story embedded in a tight thriller. More to come on that- I promise! In fact, if you check out my author website at www.jrlewisauthor.blog/ you will find more about me, my writing, my books, and Fan Mail.