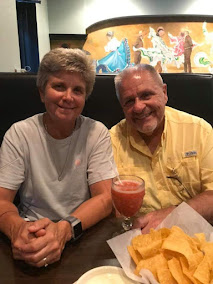 I’ve written on this topic before, but I’ve had an experience recently that caused me to pause and consider the topic again. I’m at the age when the “check engine” light comes on and it better be heeded.

In the last week or so, I took one of the home testing kits that has been advertised. I’ve taken it before, approximately six years ago, and it came back negative. No problems, all is good. However, this go-round, it came back positive. The doctor’s office contacted me and said I needed to see a specialist because of the possibility of cancer.

Kim did some research and found that a “positive” doesn’t always mean cancer, but rather, the test “detects something” in the body. And, the test has its share of false positives. My worry was still present, but it lessened.

I made an appointment with the specialist, a procedure was done, and the doctor sent two specimens to pathology, but he also stated with a fair amount of certainty that nothing was abnormal and I’d be fine.

Still, I began thinking of the many moments in my life that meant something to me. My marriage to Kim. The birth of our first child, Hannah. The adoption of our son, Wil. The birth of our daughter, Emily. The first book I wrote and published. Going way back, taking a team to a state championship and winning. My first teaching and coaching position in Wyoming. Being asked to coach at the collegiate level. My first and second master’s degree. Being a counselor. An administrator.

Watching my daughter play in a collegiate soccer game, earning several awards along the way. Watching both daughters graduate and receive jobs. Walking Hannah down the aisle with Kim at Hannah’s and Alex’s wedding.

And I thought about the things I still wanted to do. Hold my first (of many) grandchild. More vacations with Kim. Holiday celebrations with my family. Other book ideas I want to put in print.

I wrote and completed a new book recently. Fan Mail drops in March 2023. In it, there is a conversation that takes place between Brian, a high school kid struggling with his family and discovering who he is, and his basketball coach, Tommy Harrison. The conversation is one of the deeper moments in the story. Harrison says:

“… but when it comes to living your own life, there is no wrong or right. We are given a life. We are given moments. We have to make the most of those moments in our lives.”

When I wrote this and subsequent passages in that book, I did not know my home test would give me a positive result and no idea the result would be false. Yet, that test brought me right back to this passage in the book I had written. How my life parallels the lives of the characters I create in my books! Not totally, of course. The characters aren’t me. Yet, they are me because they come from me.

Just this week, there were/are several huge moments in my life. The birthday of my son-in-law, Alex, was July 9th. Today, July 11th is Kim’s and my anniversary. Tomorrow, July 12th, is the day our son, Wil, was shot and killed as he walked down a Chicago street. And there will be other moments to come, some I know about, others not until they happen.

There was a modern pope, and I forget which one, who on his deathbed stated, “I am ready. My bags are packed.” What a cool way to go out. When my time comes, I’d like to think that my bags will be packed, too. Right now, however, they aren’t. I have things scattered everywhere. There are things I still want to do. Necessary things? Probably not to others, but necessary to me. Yet, when the time comes, I want my bags to be packed. I want to be ready.

And like Harrison said in my book, Fan Mail, between now and then, I have a life to live and moments to embrace and cherish. I think all of us do, don’t we? Something to think about . . .

Live Your Life, and Make A Positive Difference!

My publisher, Black Rose Writing, has a special tomorrow only! You can purchase the Kindle version of my book, Stolen Lives, for only $0.99. Again, this is only for tomorrow. If you’d like to start at the beginning of my books, this would be a great way to begin. Stolen Lives is the first book of the Lives Trilogy and introduces you to all or most of the characters in my subsequent books. Tomorrow only- $0.99 on Kindle.

My ninth book, Fan Mail, has been accepted by my publisher, Black Rose Writing. The publication date is March 30, 2023. I am so pleased with this book. It differs from my other work in that it is a coming-of-age story embedded in a tight thriller. More to come on that- I promise!

While you wait for Fan Mail to hit, I hope you take the time to enjoy my other work. The last four books have won twelve awards, while my Lives Trilogy has won two awards.

And, if you have read one of my books, I would like to ask a favor. If you could go online and write a review or, at the least, give a rating on the book, it would be of great help. Both a review and a rating would be wonderful. The review could be one or two lines. It doesn’t have to be long. Just let others know you read it and hopefully, enjoyed it. Obviously, 4s and 5s are the best. Thanks for this consideration.

Photo of Unknown, most likely family.