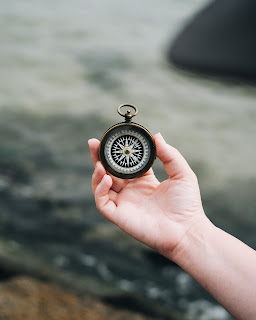 I was only in cub scouts for three or four years. My mom was a den mother and my dad was the helper. I enjoyed the Pinewood Derby and the projects we worked on. Dad was a wiz at that kind of stuff. I was in boy scouts for only a year. I don’t remember what merit badges I earned, but it wasn’t more than a handful. Mostly, I was in boy scouts because a couple of my friends were, and I liked the camping.

I lived in California for eleven years, Wyoming for three, Nebraska for two, and now in Virginia for fourteen years and counting. I’ve lived in Wisconsin for most of my life.

When people came to visit us in any of those places, I gladly drove. I could navigate LA, San Diego and parts in between with no problem. Same with Nebraska, Wyoming, and I’m getting used to Virginia. Wisconsin, I can get pretty much anywhere with my eyes closed.

One thing I never mastered was the compass. This is going to sound absurd, but it is the truth. While I can navigate those cities to and from and all the attractions they offer, I cannot, for the life of me, get myself out of parking lots. Seriously.

I drive into a parking lot and I forget which way I came in. I might find the exit, but I forget which direction I’m supposed to go when I leave. Kim just shakes her head.

It has been this way forever! It’s a kind of joke in our family that most of the Lewis clan are anti-directional. Heck, place me in a paper bag and I would struggle to find my way out. At least I’d be with a couple of my brothers and sisters. Paper bags and parking lots, I suppose.

I tired of coaching and teaching, and wanted to put my counseling degree to use. My first stint was at a small school, and there were only two counselors. I moved to a much larger school and was part of a counseling team of eight.

I loved counseling, but I thought being an administrator might be fun. (That will be a subject for another post.) My first job was at a school of 3,000. I was one of two associate principals, and there were five vice principals under us. Then, I wanted to be a principal. Started at a small school, went to a bigger school with each move.

Do you see a pattern? From small to big. One part of the country to the next. Always in search of something . . . more, something . . . better. Never satisfied, always thinking, yearning for the next big thing.

I’ve reached a point in my life where I seek the simple things (something I touched on last week in, A Pause, A Reset.) Perhaps it’s because I found my compass. Perhaps I always had a compass, but I never used it.

I want my daughters and Hannah’s husband and Emily’s boyfriend nearby and want to see them more often. I want them happy. If I can take away their worries and troubles, I will. I want to sit with Kim and talk. Or sit with Kim and just know she’s nearby. I want to hang onto my friends. I want to look up friends I had “once upon a time” and see what they’re up to, spend time with them, listen to them. I want to sit in the sun, preferably at a beach, with Kim and my family by my side. When my time is up, throw some of my ashes in the ocean and use the rest to plant a tree. I’m okay with that.

Before that time comes, I want to keep writing. I’m almost done with #9, Fan Mail. I know the edits and revisions will take time, but there is a sense of peace, a sense of satisfaction when the last page is finished. And I’m smart enough to know that a book, any book, is never completed by the author, only the reader. I already have ideas for three others, each competing to come next.

Yes, I think I found my compass. Happy I did. It took some time, but I found it. Maybe it’s time to check your compass. Are you using it? Is it working for you? Something to think about . . .