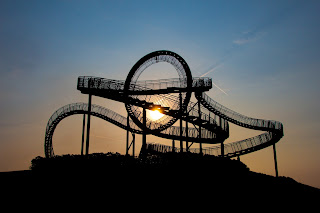 I first published this post in 2013. Since then, there have been many, many changes in my life. The death of our son, Wil. Hannah’s marriage. Emily’s upcoming graduation from grad school. My retirement, or semi-retirement, as I call it.

Life, if lived to its fullest, is not a merry-go-round, but a roller coaster. It’s the ups and downs of life, if taken in stride, that give you an appreciation for what you have and the joy in this life. I don’t believe there can be a true experience of joy, of peace, of contentment, of love without experiencing their opposites. Just my opinion. I could be wrong. I’ve been known to be wrong.

When I was a kid, I loved going to fairs and amusement parks. I’d buy a bunch of tickets and go on the rides all day or all night. I think night was the best. The lights. The sounds. The smells. The faster, the better.

I never liked the Ferris Wheel because I don’t do heights very well. It seemed like most of the ride was either loading or unloading passengers. I hated getting stuck on the top. And, was that one little bar across your lap really supposed to prevent you from falling out? Yeah, right!

Merry-Go-Rounds were okay if you were little. When my kids were little, they’d try to find the fastest horse to ride, and we’d race. Of course, my kids always won. Funny how that happens. But as I, and they, got older, Merry-Go-Rounds got stale. I mean, all they did was go around, and around, and . . .

I prefer Roller Coasters. The slow, steady climb up the hill. The building of excitement. The heart pounds, beats faster. As you near the top, you hold your breath. As you go over the pinnacle, you throw your hands up in the air and scream. Okay, maybe you don’t scream, but I do. Sometimes just in my head because I don’t want to look like a wuss to my kids. We race around turns, through loops and corkscrews. It doesn’t last but a minute or two, but it’s fun. It’s exciting. And, you find yourself climbing on board again, and again, and . . .

I prefer to live my life like it was a Roller Coaster. Twists and turns. Ups and downs. Sometimes slow. Sometimes fast. Climbing towards the top, and then plunging down over the pinnacle only to level out and climb another hill, then plunge down once again. At times I want to hold my breath. At other times, I want to scream out of fear, sometimes out of joy. At times I have enough and want to get off, but I find myself climbing back on board. I near the top and throw my hands in the air and just go with it.

It’s really a choice. Your choice. My choice. Rather than the Merry-Go-Round where you go around, and around, and . . . in a never-ending circle, choose the Roller Coaster. It’s more exciting. Slow. Fast. Up. Down. Twists. Turns. Your choice. Hang on and enjoy the ride. Something to think about . . .

I finished my ninth book, Fan Mail, and it differs from the other books I’ve written. It is more coming of age wrapped in a thriller. It is longer than my other books, but it was fun and satisfying to write. Like I have done in some of my other books, I laughed out loud and wept in spots as I wrote it. It will tug at your emotions, and most assuredly, will cause you to reflect.

I also had the honor of being interviews by Vinnie O’Hare and having my book, Blaze In, Blaze Out, featured in Awesome Books. The link to it is: https://awesomebookpromotion.com/?p=28615

Photo Courtesy of Justin and Unsplash.