A Pause, A Reset 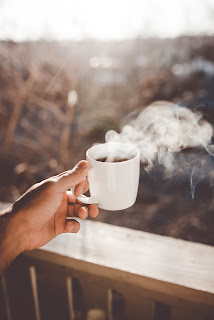 Slept in a little longer this morning. Longer than I usually do. A rarity.

In bed, I looked out the window and saw blue sky with whitish-gray clouds, and I wondered if it was warm, cool, or cold. I realize that temperature is specific to any individual, and I’m one who likes warm and hot, not cool or cold. I checked the temp on my phone. Cold. Not getting too much warmer, either.

Still, it was pretty, and it was peaceful.

I could smell the roast Kim had prepared for our Sunday dinner. The French Onion soup pungent. Brought back times from my childhood when mom would make a similar dinner. All of us gathered around the table to share the meal, tell our stories, laugh. It will be just the two of us this day. That is okay. More than okay.

No plans for the day. A bit of writing. Some reading. Taking it slow and easy, a pleasant break from the faster pace of the week. Needed.

Nice to have a break, a pause, in the week.

During the week, I have kids complain that their computer is frozen. Won’t advance, and it won’t go back. I tell them to turn it off and then turn it back on. For whatever reason, this works more often than not.

And like the computer that sometimes needs to be reset during the day, our bodies and our minds need a reset, too. Good for the head. Good for the soul. Take a step back, turn off, quiet down.

As I sit in front of my laptop this morning pecking away at my keys, only the hum of the refrigerator is my company. Kim, working elsewhere on some catch-up from her week. She sips hot tea, a morning ritual for her, just like her jogging, just like her cross fit.

I’m content to sit at the table armed with my iced tea. As hard as it is to turn completely off, my mind races with the novel I’m working on, the eight books I have on the market, and the promotion I need to do. Pleasurable for me, though. Not a task. Not a chore. Certainly not drudgery. It is the way I relax. Inventing new worlds. Throwing hurdles and obstacles in my characters’ paths. Watching them, hearing them negotiate safe passage.

As I write this, the song, Sunday Drive by Brett Eldridge, plays in the back of my mind. His opening lyrics:

They didn't ever say where we were going
We just climbed into the backseat
Eyes wide open to the picture show outside
I guess we really didn't understand it all
Remember looking up at them in the front row
Hands touched together, almost out of sight
It's been a long, hard week, but now the slow release
Of a Sunday afternoon

And we were only young
But they were trying hard to reach us
How was I to know
That there was something so worth keepin'?

'Cause we were
Watching the world through an open window
Trees lined up like dominoes
This old car could find its own way home
It's the ordinary things that mean so much
That's where I learned it all from them
To fight, to love, to laugh again
Man, I thought we were only wasting time
Out on a Sunday drive

The sun warms your soul just like an old friend
Singing songs along that ribbon of a road
And everyone you love is sitting there so close
You're never thinking that you'd ever get old
No, you'll never get old

The song and video is a much needed help for resetting and recharging. You can find it here:

His gift to us. My gift to you.