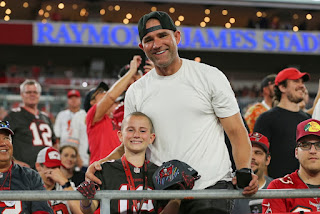 Rather than succumb to the mind-numbing suffering, pain, lies, and deceit rampant in our world today, I searched for a story to share. Something memorable, touching, and perhaps heart-wrenching. These stories are not to bring you down, but rather, to highlight acts of kindness that are all too often overlooked in today’s world.

Meet Five. Five is a waiter at 42nd Street Oyster Bar in Raleigh, NC. He works two jobs and is getting ready to start classes again in January. He's a humble guy, who doesn't really like attention. His act of kindness generated it.

Lee Bondurant has cerebral palsy. He and Five met about a month ago when Lee was in the restaurant with his mother, Linda. Like many waiters and waitresses, Five was busy. As he worked, he noticed Lee's mom feeding Lee his meal. As I said, Lee has cerebral palsy. Five wanted to make sure all his customers enjoyed their meals.

Five asked other waiters and waitresses to cover his table, and he took over feeding Lee his food. Lee's mom, Linda, took a picture of Five feeding her son.

As sometimes happens, the picture went viral. Five doesn’t have a Facebook page, and his manager had to tell him what had happened. Five even had to ask what “likes” and “shares” were. He received messages and letters from across the country, and some from other countries. Some letters contained money, so Five started a cerebral palsy foundation in Lee’s name.

You can see the picture Lee’s mom took, along with a short video clip of the story at: https://abc11.com/diner-kindness-server-serving-others/1427807/

Ten-year-old Noah Reeb had severe migraines. Scans were done, and they showed a tumor growing in Noah’s brain. Worse, the tumor was malignant.

Noah loves football. So much so, he plays for two different teams. His favorite player? Tom Brady.

When the diagnosis was given to Noah’s mom, she called her husband to give him the news. Noah asked two things: Was he going to die? Would he get to play in the NFL?

During a visit and procedure, Noah’s father asked Noah if he wanted anything. A snack? A nap? A movie? Noah asked to watch Tom Brady highlights. So they watched them together.

Todd Heap is Noah’s cousin. He played for the Ravens, and his wife contacted Tom Brady with Noah’s story. Tom sent a video of encouragement to Noah that he replays over and over. Noah’s father and mother said that if Noah beat cancer, they would take him to the first game they could get tickets for to watch Tom Brady play.

One day, after many surgeries, chemo, and radiation, Noah rang the bell indicating he had beaten cancer, and his family followed through on Noah’s pact. He held a sign the entire game, telling everyone he had beaten cancer. One of Brady’s teammates noticed the sign, walked over, and congratulated Noah, and then told Brady. Brady came over with a hat, signed it, and placed it on Noah’s head, and shook his hand, congratulating him.

A memory, a small gesture. A small gift of time that Noah will remember as long as he lives. You can see the story and the clip at: https://www.fox13now.com/news/positively-utah/tom-brady-responds-to-utah-boy-who-beat-brain-cancer-waved-sign-at-bucs-game

Five, a worker getting ready to take classes. Tom Brady, a famous football player. Two individuals as different as can be, but sharing something important. Compassion, kindness, and caring. Something that can make life better for someone else. Something to think about . . .