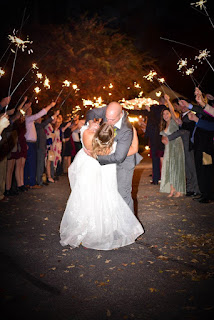 This past weekend, friends and family gathered from across the country – literally – to celebrate my daughter’s marriage to her best friend, Alex. Throughout the years, I’ve seen Hannah happy. I’ve seen my wife, Kim, happy, and I’ve seen my daughter, Emily, happy. If it is possible, I don’t think I’ve ever seen them as happy as they were this past weekend. I don’t think I’ve stopped smiling. In fact, it was such a joyous wedding weekend, I couldn’t sleep Saturday night as I played the day through from beginning to end on continuous repeat.

I can only describe Alex’s and Hannah’s wedding day as magical. A true celebration of two families coming together in joy and laughter to support two young hearts deeply in love. A Cherished Moment, to be sure!

Hannah and Alex spent months, days, and hours planning it. Postponed one year because of Covid, they had it on the same Saturday as originally planned only one year later. The ceremony took place outdoors on the steps of an Inn, and the reception took place in the back in two tented pavilions. It was chilly, so they had portable heaters. No one seemed to care about the chill.

Speeches were perfect. A nice blend of funny and poignant and nostalgia, much like Alex’s and Hannah’s vows. I sang Paul Stookey’s Wedding Song and almost made it through without choking up. Knowing I was vulnerable, I kept my eyes glued on the sheet music in my folder. The last line of the song is, “And there is love” preceded by four or five bars of instrumental. I made the mistake of glancing up at Alex and Hannah, and saw them weeping. Aw hell! I ended up with my heart in my throat and I think I choked out the last line in nearly a whisper. I couldn’t help it.

Hannah picked a Zak Brown song, The Man Who Loved You Most, for the father-daughter dance. She and I both broke down, and I truly cherished that moment. Later that evening, during the dance after the dinner, she and I laughed as we danced a polka, spinning and twirling.

Life gives us many cherished moments. The birth of a child. A graduation. Watching a sunset or sunrise. A first kiss. A first date. A proposal. Certainly, a wedding.