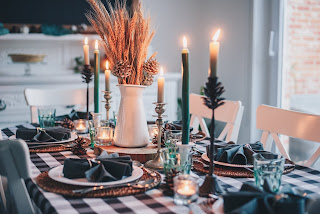 Hannah and Alex are on their honeymoon for the week. Well deserved, and a happy send off and start up for their years together. Emily is with her boyfriend in South Carolina, visiting his family. That leaves Kim and me with five dogs: our two, Hannah’s and Alex’s two, and Emily’s one. Kim and I jokingly call them our grandchildren.

It is also my birthday. I’m sixty-eight, still going strong, though slower. Semi-retired, and loving it. I get to work with kids directly again. I missed that. Kim still teaches and will do so for the next three or four years. Maybe less. Hopefully, less.

Kim is at cross fit. She already ran her six miles in the dark, but likes the additional workout. As she likes to say, it’s her morning cup of coffee. Me, I’m sitting at the kitchen table putting this post together, something I should have done a couple of days ago. Time got away from me. Odd, since I have more of it these days.

Thanksgiving is probably my favorite holiday. The whole purpose behind it is in its name: to give thanks. And I have much to be grateful for.

Hannah’s and Alex’s wedding was two weekends ago, and I’m still smiling. It was such a fun weekend. Emily has one more semester of grad school to go and then she will be a clinical social worker. She already has “nibbles” of jobs. Nice that folks think highly of her, even though she isn’t quite finished with the program yet.

I’m especially grateful for my family, both my own and my extended family. It’s always nice when we get together, and it seems it happens less and less. I’m grateful for my health. Nothing big, nothing ugly. Just trucking along quietly and comfortably.

I’m grateful for Fall. The colors of leaves. The crisp bite of morning air. Flannel and sweatshirts and jeans. The sun winking its good-morning over the trees in our backyard. The moon keeping watch at night.

The comfort of a warm bed, food to eat, a roof overhead. Books to read, and to write. Friends who keep in touch. Fewer decisions to make. Peace in my home and in my heart. Contentment with what I have, not really needing anything more.

Gratitude, being Thankful, is such a powerful emotion. It has love at its root. I don’t believe one can be thankful without love. I don’t think one can have gratitude without the firm foundation of love.

And I think there needs to be more gratitude in life. I think we need to appreciate what we have, as little or as great as it might be, knowing it can be less, and there are those who suffer because of the little they have.

I think we have to understand that there will always be those who have more than we do, while others will have less. Gratitude for what we have, thankfulness for what we have, is sometimes forgotten. And when it is forgotten, we are less happy, more grumpy, more negative. And in these days, in these times, we can’t afford any more negativity than there is now. Something to think about . . .