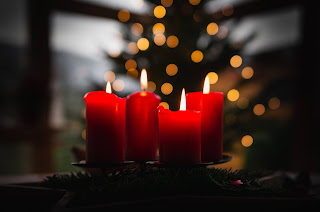 This is the season of preparation, isn’t it? For us, it began with a Thanksgiving dinner at Hannah’s and Alex’s house. It was their first time hosting it in their new home. The four of us made the turkey, the mashed potatoes, the green bean casserole, sausage stuffing, and rolls. The kitchen was rather small, but that made it all the more fun.

Emily and Q surprised us by coming up for a quick visit yesterday. Alex and Hannah joined us. Kim made white chicken chili, and we had a game night. Lots of laughter, and that’s always good. Laughter is always good.

Then the Christmas decorations appeared. Em and Q disappeared downstairs and up came the plastic bins containing most everything we need to decorate the house. We’re not quite done, but we had a great start.

Alex and Hannah headed back home last evening. Em and Q will leave sometime this afternoon. It will be Kim and me holding down the fort until we all gather together to celebrate Christmas.

Today marks the first Sunday in Advent. This season is celebrated by most Christian churches. Advent marks the preparation for the birth of our Lord. As Christians, we prepare.

There are many things we prepare for, aren’t there? A date. A marriage. The birth of a child. First day of school. First day on a new job. Retirement. We sit down and plan to make everything just right so that in the end, the outcome is what we would hope for.

2020 threw us a curveball, didn’t it? Maybe not even a curveball. Maybe a high and tight fastball pushing us back off the plate or out of the batter’s box. Maybe 2020 is more like the 250-pound linebacker speeding through a hole in the line on a blindside blitz. Like the unsuspecting quarterback, we never saw 2020, that menacing linebacker coming. Yet, it’s here and we’re in the middle of it and for some of us, probably in a heap in the grass a little more bruised than normal.

Hannah and Emily loved to go Black Friday shopping at the mall. I never knew if a “deal” was really a “deal” but the girls enjoyed going out and doing their thing. The crowds. The rush.

Theaters? Concerts? Hopefully, not things of the past, but instead, things to look forward to. Family get-togethers? Maybe the immediate family- if we’re lucky. Extended family, perhaps not yet. Hopefully soon. There are multiple vaccines and only the distribution needs to be figured out.

Advent. The preparation. For what?

It takes more than belief, however. It takes preparation. It takes an Advent of the heart, of the soul, and of the mind.

My newest book, Betrayed, is now available on Amazon and Barnes and Noble. You will find the link for Amazon at: https://amzn.to/2EKHudx

Betrayed was featured in a Blog Tour. The idea is each day, a writer/blogger/reviewer would post a review. I was so pleased with the response. Some of the reviews from that tour are: