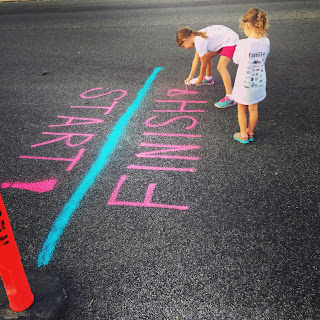 My wife, Kim, runs almost every morning at Zero-Dark-Thirty. Much of the time, I’m not even aware she is gone. She runs in most all kinds of weather including snow, cold and rain, though she won’t run if it is already raining when she gets up. If it begins to rain during her run, she’s okay with that.

One day, I asked her which part of the run is the hardest: the beginning, middle or end? Her answer was the beginning because her heart rate isn’t up yet.

Jimmy is a freshman at Temple University and runs for their cross country team. I asked him the same question and he said the middle is the hardest for him. I asked him why and he said at the beginning he always feels pretty good and then at the end, he’s almost done. For him, the middle is the hardest because that’s when you have to focus the most, which is the most difficult.

I am not a runner. No way, no how. Used to be, but those days passed me by and I happily waved at them as they went by. I may have even smiled. Heck, I’m smiling now.

As a writer, I face a beginning, a middle and an end.

For me, the beginning is the easiest. When I sit down to write, I already have the idea or question I want to write about. It’s fresh and it’s exciting to string words together on a blank page. The end is exciting because it is just that- the end. Of course, I have to shape it and make it appealing. I only used a cliffhanger ending twice. Most of the time, I tie up loose ends and might use the ending to imply or tease the beginning of a new book.

The hardest for me is the middle. Everything I write I try to make it relevant towards the final scene, the ending. Each word, each scene, each chapter needs to propel the reader forward. There is nothing I hate worse than when reading a book, I come across a chapter or chapters that don’t add to the story.

Those of you who have read my work know I use short chapters that don’t have tidy endings. I call them Patterson Chapters, named after James Patterson who does the same thing. Chapters are short and propel the reader to the next chapter and on and on until the end. That’s my goal, because that’s the kind of book I like to read.

At the start, we are totally dependent upon the adults in our lives. They feed us, bathe us, clothe us, and comfort us. Pretty much the same thing happens at the finish, doesn’t it? If we are unable to do so for ourselves, we become dependent upon those who will take care of us just like someone did at the start of our lives.

So, what of the middle?

I think like Jimmy and his running, and like me in my writing, the middle of our lives can be the hardest. Sometimes we lose our way and we lose sight of the finish. Or at least, we lose sight of how we intend or would like to finish. Sometimes the start and the middle seem so hopelessly damaged that we think there is no way we can find the finish. Sadly, sometimes the finish comes way too soon when we thought the finish was a distant goal at some unknown point in the future.

I think of two examples of how I would like to finish.

The first is an Olympic runner some years ago. A marathoner. At some point during the race he fell. All the runners passed him by. Yet, he finished hours later. When asked why he kept running, he said, “My country didn’t send me thousands of miles to start a race, they sent me to finish.” I find inspiration in that.

The other example is religious, and I make no apologies for this. I think of the moment on that dark Friday when up on a hill for all to see, three men were hanging on crosses. Two were thieves. One was a just and good man. One of the thieves called on the good man to save himself and them. The other thief rebuked him saying, and I’m paraphrasing, “Don’t you know who this man is? We deserve to be here. He doesn’t.” Then he turned to the good man and said, “Please remember me when you enter paradise.” The good man turned to that thief and said, “Yet this day you will be with me in paradise.”

Now, I don’t know what that thief did in his life to end up on that cross. Had to be pretty bad, right? At some point along the way, he lost his way. It wasn’t until the very end that he seemed to find it. No one begins life as a thief. At least I don’t think so. At some point, one loses his way. Like the Olympic runner who fell. Like the thief on the cross.

But in one case, the Olympic runner made a decision to keep running so he could finish. In the other case, the thief came to the realization that he had screwed up. He was sorry, and he seemed to ask for forgiveness. In both cases, they finished. Battered. A tad broken. But they finished. We can too. We might stumble and fall. We might lose our way and do much wrong- to ourselves and to others. But, we can and we must finish. As cleanly and as strongly as we began at the start. We can. We must. Something to think about . . .

My newest book, Betrayed, came out this past week and is now available on Amazon and Barnes and Noble. You will find the link for Amazon at: https://amzn.to/2EKHudx

“The Bottom Line: A stirring and unusual tale of teenage love, adventure and murder. While author Joseph Lewis has filled Betrayed with a large and compelling cast, the story belongs to Brian, one of several characters from Lewis’ excellent crime thriller, Spiral Into Darkness. The relationship between Brian and his family is incredibly well-drawn and often touching. Readers will be rewarded with an explosive adventure.”
-        BestThrillers.com
"This novel is an action-packed thriller that will keep the reader turning the pages. The descriptions of settings and characters are extremely well done, and the pacing is perfect. The ending ties up all the loose ends, yet you feel (and hope) there will be more from these characters in the future. Action and adventure are the words of the day in this thrilling, well-written page-turner from Joseph Lewis.”
-        Sublime Review
“To call Betrayed a thriller alone would be to do it a disservice. It’s a social inspection of Navajo reservation culture and life, and its probe of the roots of love and connection are wonderfully woven into a story of adversity and the struggle to survive on many levels. These elements make Betrayed particularly recommended for readers who look for psychological depth and complexity from a story of violence and evolution.”
-        Diane Donovan, Editor; Donovan's Literary Services; Midwest Book Review/Bookwatch; Author of San Francisco Relocated.
Spiral Into Darkness: Named a Recommended Read in the Author Shout Reader Awards!
He blends in. He is successful, intelligent and methodical. He has a list and has murdered eight on it so far. There is no discernible pattern. There are no clues. There are no leads. The only thing the FBI and local police have to go on is the method of death: two bullets to the face- gruesome and meant to send a message. But it’s difficult to understand any message coming from a dark and damaged mind. Two adopted boys, struggling in their own world, have no idea they are the next targets. Neither does their family. And neither does local law enforcement. https://amzn.to/2RBWvTm
Caught in a Web: A PenCraft Literary Award Winner!
The bodies of high school and middle school kids are found dead from an overdose of heroin and fentanyl. The drug trade along the I-94 and I-43 corridors and the Milwaukee Metro area is controlled by MS-13, a violent gang originating from El Salvador. Ricardo Fuentes is sent from Chicago to Waukesha to find out who is cutting in on their business, shut it down and teach them a lesson. But he has an ulterior motive: find and kill a fifteen-year-old boy, George Tokay. Detectives Jamie Graff, Pat O’Connor and Paul Eiselmann race to find the source of the drugs, shut down the ring, and find Fuentes before he kills anyone else, especially George or members of his family. https://www.amazon.com/dp/B07CKF7696

Book One of the Lives Trilogy, Stolen Lives:
Two thirteen-year-old boys are abducted off a safe suburban street. Kelliher and his team of FBI agents have 24 hours to find them or they’ll end up like all the others- dead! They have no leads, no clues, and nothing to go on. And the possibility exists that one of his team members might be involved. http://tinyurl.com/Stolen-Lives-J-Lewis
Book Two of the Lives Trilogy, Shattered Lives:
Six men, each more dangerous than the next, escaped and are out for revenge. The boys, recently freed from captivity, are in danger and so are their families, but they don’t know it. The FBI has no clues, no leads, and nothing to go on and because of that, cannot protect them. http://tinyurl.com/Shattered-Lives-J-Lewis
Book Three of the Lives Trilogy, Splintered Lives:
The final chapter, the close of the Lives Trilogy. A 14-year-old boy knows the end is coming. What he doesn’t know is when, where, or by whom. Without that knowledge, neither he nor the FBI can protect him or his family. http://tinyurl.com/Splintered-Lives-J-Lewis
The Lives Trilogy Prequel, Taking Lives:
FBI Agent Pete Kelliher and his partner search for the clues behind the bodies of six boys left in various and remote parts of the country. Even though they don’t know one another, the lives of FBI Kelliher, 11-year-old Brett McGovern, and 11-year-old George Tokay are separate pieces of a puzzle. The two boys become interwoven with the same thread Pete Kelliher holds in his hand. The three of them are on a collision course and when that happens, their lives are in jeopardy as each search for a way out. http://tinyurl.com/Taking-Lives-J-Lewis