Who Do I Trust? 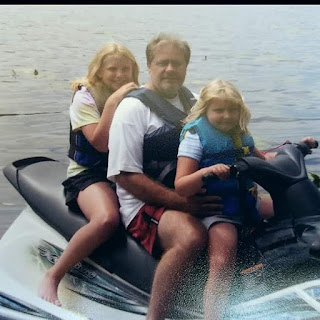 Back when I was single and when I moved from Omaha back to Wisconsin, I lived briefly with my older brother and his wife, Jim and Laurie. They have three kids, now all grown up. Back then, the youngest, Kim, was still in a highchair.

I remember going out to dinner with them to a Chinese restaurant, and when the meal came. Kim declared her food was too hot, so my brother blew on it to cool it down. Kim waited patiently, and when Jim was finished, Kim began eating it. That’s trust.

She didn’t know if it was still too hot to eat, but she trusted her dad. If he said it was now okay to eat, that was good enough for her.

Flash forward many years to when my wife, Kim (certainly not Jim’s daughter 😊) and I had our own kids. Hannah and Emily were still in elementary school. We had a jet ski and either Kim or I would take them out for rides. Either of us would drive, and Hannah and Emily- together or separately, would mount the machine and hold on tight. They trusted us to not crash or do anything too stupid with it.

My first year of teaching, I gave my seventh graders an assignment. Being a small school (72 kids in the high school and 110 in grades seven through 12), there was one social studies teacher: me. Sitting at my desk while the kids worked, I overheard one student ask another for help. Wayne tried as best he could and when he couldn’t go beyond what he knew, he said, “Ask Joe. He’s the teacher. He’ll help you.” Trust.

My last year as a head basketball coach, we faced a tough conference rival in the division championship for the rights to go to the regional competition. It was around a minute left and I called a timeout. One of my assistants turned to the other assistant and said, “Watch this!” confident that I knew what to do in the final seconds. It seemed I did, but we lost when the player, clearly open, slipped and fell as the pass was thrown his way and was intercepted. Trust.

Time and again, we face situations where we are asked to trust: someone else, a leader, God, our child, our spouse, ourselves. Sometimes trust comes easy, while at other times, mmm, not so much!

When that trust is crushed and betrayed, not only does it make us angry, but it hurts. It hurts deep down.

I’m not sure where I heard it or if it is original, but I told kids- my own or my team or my students, that trust is like a mustache. It takes a long time to grow, to shape, and to make it look presentable, but less than five minutes to shave off.

That’s what betraying someone’s trust does. We might try to trust again. Maybe. It might take a while, perhaps a long time. Maybe we got burned too badly and that trust never happens again. I’m certain that today, as the Packers play once again, Rodgers will throw the ball to that same rookie receiver, hoping the result pans out. Heck, I hope so too.

But I think we need to take better care of who we trust, and we need to take care to make sure we are trustworthy. Losing someone’s trust hurts- both the one who trusts and the one who is trusted. Take care of trust. Value it. Cherish it. Make sure you are someone who is and can be trusted. Something to think about …

In a couple of weeks, I should receive a preview of the cover for my ninth book, Fan Mail. The publication date is March 30, 2023. If you check out my author website at www.jrlewisauthor.blog/ you will find more about me, my writing, my books, my new gig as Story Writer, and my new book, Fan Mail.