In Their Own Time 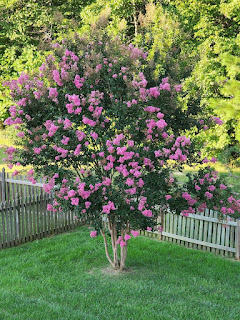 We have three Crepe Myrtles in our yard. Two in the back corners and one in the front of the house, but off to the side. Three different colors: white, pink, and red. I was partial to the red one, so we planted it in front of the house, while the white sits in the back right, and the pink on the back left. The two in the back bookend the knockout roses and the Japanese Maple trees. It’s peaceful and almost perfect. Serene. My favorite place to sit is on the lower patio. 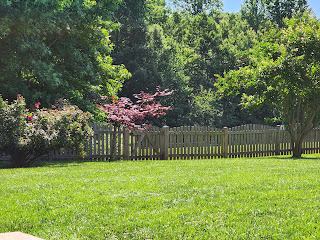 We noticed the differences in the way the three grow.

The white one grows and blooms the fastest. Perhaps it’s because the tree is in direct sun from sunrise to almost sundown, while the pink one is shielded and shaded from the sun because of the woods behind our house. And the red one is the smallest of all, and we think it is in the shade of our large oak tree. The only sun the red one receives is in the afternoon, when the sun is at its harshest.

All of them receive the same water. We prune them evenly, yet the two in the backyard are the tallest, while the red one is the shortest. And like clockwork, the white one will always bloom first, followed by the red one, and last, the pink one.

For 47 years, I’ve watched kids grow, including three of my own. I’ve watched them grasp concepts- or not, as the case may be. Some caught on quickly and knew how to “play the game” to their advantage, while others struggled and chafed at the bit, as they say. Their “learning” came later, after resisting. Resisting what, I don’t know. General stubbornness, I suppose.

One student comes to mind. I’ll call him Al.

Al was in three of my online learning classes last year. He was a project. Quiet. Likeable. A lot going on. Lived with mom. Month to month, he didn’t know if they could keep the apartment they lived in. Food? He helped put it on the table. Clothes? He kept what little he owned clean. School? Truly an afterthought. Like I said, he had a lot going on.

He started out strong, but as the year progressed, he didn’t. He fell behind despite my encouragement and the encouragement from his counselor. By his own admission, he fell in with a rough crowd. That didn’t help his situation.

Flash forward to the last two weeks of school. He was failing all three of the classes he took with me. All of them. I didn’t think there was any hope of any course being salvaged. Like some kids do, he surprised me.

My wife and I went to dinner at a local restaurant one evening this past week, and we ran into Al, who worked there. A great smile- he always wore that despite his circumstances. After we were done eating, I called Al over to our table and introduced him to Kim. He told us his story. Not the full of it, but enough of it. I told him how proud I was of him. He beamed. He apologized for being “mean to me” but I never experienced that from him- not one day. Those were his words, but honestly, I would never have used them. Kim remarked he had a wonderful smile.

I was asked, and I accepted a position of Story Writer for Acorn TV. I write short stories or submit my books to them and they decided if they want to develop them into a TV series or movie. My short story, Changes and Secrets, is going into production. They are flying in a crew of fifteen and a production manager to scout out locations, production design, and production schedule, and discuss with me the script, and possible changes. I’ll keep you posted on how that goes.

This next month, I should receive a preview of the cover for my ninth book, Fan Mail. The publication date is March 30, 2023. If you check out my author website at www.jrlewisauthor.blog/ you will find more about me, my writing, my books, my new gig as Story Writer, and my new book, Fan Mail.