What is Your Treasure? 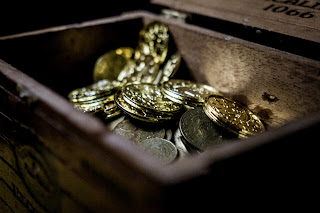 Growing up in a family of ten on one income, even way back in the fifties and sixties, was tough. We didn’t have much, but we had plenty. Ironic, isn’t it?

We wore hand-me-downs, and mom patched holes in our jeans. Dad repainted bicycles. We had sports to play, books to read, a radio to listen to, and a TV to watch. Mom made sure we had food on the table, prepared and baked by her.

We had a backyard to play in, woods to explore, and a river to raft on. Church each Sunday- left side, third or fourth pew. Cub Scouts and Boy Scouts, though I didn’t excel or pursue scouting. I was into other things. Sports. Music. And school.

We had neighborhood friends to play with, but mostly, we had each other.

And then, somehow, I lost my treasure!

In college, I had a passion for coaching, but in order to coach, one should be (or so I thought) a teacher. I had always wanted to coach football alongside my brother, Jack. He’d coach defense, and I’d coach offense. Not to happen. I became a basketball coach by chance. The phone call to come interview stated I would teach social studies and be a head football coach, assistant basketball coach. Fine with me. Got to the interview, and about half-way through, they informed me they had hired a head football coach, and offered me head basketball with assistant football. I didn’t think much about it, and I said yes!

Thought I had found my treasure!

Always wanting better, always wanting bigger, I coached three years at the high school level, then two at the college level while earning a master’s degree in counseling, then went back to high school for five more. Tiring of it, I became a counselor.

Always wanting bigger, better. More pay. Bigger and nicer house. More. The thing is, at first it was for me. A bigger name, more recognition, all that … stuff.

The treasure I thought I had wasn’t much after all!

Then, I got married and had three beautiful kids. Everything shifted- as it should have. Maybe I matured. Maybe I evolved. Maybe I learned. Who knows?

My life became about them: Kim, Wil, Hannah, and Emily. Whatever I did, I wanted it for them! To make them happy, to see them successful, to ensure their lives beyond our own family.

I began doing for them, not me. Instead of money and recognition and all the “trappings” (and I emphasize trappings!) of my own success, it shifted and became about Kim and the kids! They have become and are my treasure.

And how satisfying it is now, and looking back on my life before Kim and my kids, how unsatisfying it all was then. What I thought was my treasure wasn’t.

I think my semi-retirement has helped. No pressure. No paperwork or politics that come with the office of the principal. No major decisions other than what to eat that day. Nothing major except can the laundry wait one more day or should it be done now?

I get up early on weekdays and do my part-time job at the high school- love it! I come home and I write- love it! I text the girls each day and many times throughout the day. I love hearing about their lives and what they’ve been up to. And Kim and I talk. We spend time together. Our biggest decision is what to watch on TV or what to eat for dinner.

I have a new gig!

I was asked, and I accepted a position of Story Writer for Acorn TV. I write short stories or submit my books to them and they decided if they want to develop them into a TV series or movie. Good News! One of my short stories, Changes and Secrets, is going into production. They are flying in a crew of fifteen and a production manager to scout out locations, production design, and production schedule, and discuss with me the script, and possible changes. I’ll keep you posted on how that goes.

I mentioned in my last post that my ninth book, Fan Mail, has been accepted by my publisher, Black Rose Writing. The publication date is March 30, 2023. If you check out my author website at www.jrlewisauthor.blog/ you will find more about me, my writing, my books, my new gig as Story Writer, and my new book, Fan Mail.