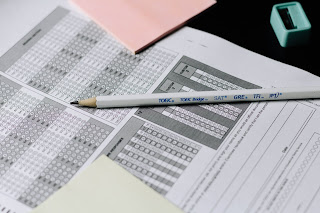 Way back when two of my sisters passed away from brain aneurisms, it caused a panic in our family. As I had mentioned in previous posts, I come from a family of ten. My sisters, Donna and Joanne, both passed away from an aneurism within a relatively short time between one another. It scared us.

It caused several of us to seek scans to see if we had a similar problem. I remember speaking to my doctor about it, and he said that the odds of one member of the family were pretty high, but two were, well, frightening. My word, not his.

I did my time in the “tube.” I didn’t know what to think. Only to find out that the test, if you want to call it that, would only show a weakness in a blood vessel or artery at that moment in time, but would not indicate a weakness later on in life.

Most of you reading this have been through school at one level or more in your lifetime. We’ve all had to study for and take tests of some kind. Some were easy, while some challenged us. On some, we did well. On others, well, not so much.

When I moved to California in the summer of 1987, I was informed that my California license to teach (I was a counselor, but it still applied to me) depended on my taking and passing the California Basic Education Skills Test (CBEST). Two tests: reading and math.

Reading was no sweat. I loved to read and still do. I knew how to write. But math? A far different animal for me. I didn’t have a love-hate relationship with math. It was and still is purely hate. Can’t stand it. I can add, subtract, multiply, and divide. On a good day, I can figure out a percent. That’s it. No more. But I knew I had to study and pass this dang CBEST.

I got myself a tutor. A really super math teacher at the school where I worked as a counselor. She was kind and patient, and didn’t laugh at me. However, her son in fifth grade, who sat across the kitchen table from me, did. Maddeningly, he would also volunteer to show me how to do some problems, and he asked his mother if he could check my work. I set out to prove to him and to the state of California I was smarter than a fifth grade math student!

I took the test. I sweated it out. I nervously waited for the results.

And I passed! And the most surprising thing about the results? I scored higher in math than I did in reading/writing! A true miracle. I was almost tempted to see if I could walk on water.

We’ve all been there when it comes to tests, haven’t we? Some we breeze through. Others we stress about.

Blood tests when the doctor suspects “something.” C-scans. X-rays. Employment. Sometimes in our marriage or every-day-life, we stress about finances, our marriage, our kids- all of them tests of a sort.

Each day presents a test for us. Whether we allow small, or even big, things to bother us, annoy us, ruin our day. Each day we face the question of will we pass this test or that test- small or big, job related or life related or love related. And at night, we are given an opportunity to reflect on how well- or not- we did on those tests. Whether we succeeded or failed. Whether we almost made it, but fell a bit short.

But after each test and each day, another day dawns. Unless the test has drastic results, we live. We are able to move on. We are able to do better the next time. And even if the test has a result that causes us angst and pain, that tells us our life is shorter than it was expected, it is in those moments, minutes, days, weeks, months, and years we have left to do . . . whatever it is we need to do, to take care of, to be at peace. Use it wisely. Take care of it. Make it meaningful. Something to think about . . .