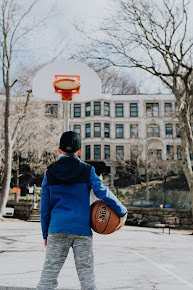 It was perhaps my third year at the last high school where I coached basketball before hanging up my whistle. There was this kid, Dan. Friendly, but reserved compared to others on the team. Respectful. Man, could he shoot. Pretty good defensively, too. There were others who were better athletes, but there was a place for Dan on my team.

One day after practice, he wanted to speak to me. Dan and I sat in the bleachers by ourselves. He had tears in his eyes when he told me he gets nervous. He didn’t want to play in pressure situations. He felt he couldn’t play in pressure situations. He didn’t know whether to stay on the team or quit. He mentioned his father had this “condition” and Dan thought he did, too. When he’s nervous, he loses his hair. His father was already bald. Dan had a fairly thick head of hair worn in the style of the mid- to late-80’s.

I was stunned. I had already slated for him to be part of a seven- or eight-man rotation. I definitely had a role for him. I convinced him to stay on the team, to be a part of the team. The guys liked him. My coaches and I liked him. We wanted him. He agreed.

One night several games later, he again asked to speak with me. He said he needed to quit the team. I asked him why. He said he didn’t like sitting on the bench. He said he wanted to play more. I reminded him of our previous conversation, and he said it felt different sitting and watching. He didn’t like it. I told him the guys and I wanted him to be a part of the team, and I asked him to sleep on it.

The following morning, I walked into the social studies planning area where my desk was, and in a brown paper grocery sack was Dan’s uniform and warm-ups. Washed, neatly folded. There was a note that said, “Thank you, Dan.”

I was reminded of that incident when Simone Biles, arguably the best gymnast in the world, withdrew from Olympic events except for the beam. She said she needed to do that for her mental health. Some in the world didn’t understand and bashed her. Others who didn’t understand accepted it and praised her for coming forward and advocating for herself. I was in the latter group.

Biles stated she had the “twisties.” From what I understand, this occurs when the gymnast loses track of where he or she is in the middle of twists and turns and every other gyration before landing. It’s dangerous. For as skilled as she is and for what stunts she performs, for her to lose her sense of place could be dangerous and devastating. Serious injury can occur.

Simone Biles, like Dan, advocated for herself. Both advocated for their mental health. They had a higher purpose, and while Dan never had the world platform Simone has, he, like she, did what he had to do to help himself. Both had pressure. Both had expectations- from themselves, and from others. We had crowned Simone a gold medalist in the Olympics, before she ever boarded the plane to Tokyo. Dan had been my choice for game situations where I needed a gun from the bench to score some points. Both different situations, but in reality, both similar situations.

I was a counselor for eleven or twelve years. I was a teacher and coach and administrator for many more. I have been a father for twenty-seven years and counting. I understand pressure. I placed it on my players. I know, unfortunately, I placed it on my kids. I saw, and see, the results of pressure from the counseling office, the administrative office, the classroom once again, and from the kitchen table.

Some kids can take it, while others can’t. We purposely put them in those situations, don’t we? We praise them. We urge them. We whisper in their ear, “You can do it!” with an arm around their shoulder. And with a pat on the butt, we send them out again to go conquer . . . themselves?

We don’t know what kids around us carry on their shoulders or in their heart. We don’t know the burden, the expectation, the pressure they place on themselves, or the burden, the expectation, the pressure that is placed on them. To succeed. To perform. To be the best. It’s no different for adults than it is for kids. But I ask again, at what cost?

I’ve seen kids in their later years walk away from the sport they “loved” and played from little on and seem happier for doing so. I’ve seen their parents shake their head as they wonder, “What in the world? Why?”

Whose world? The child’s or the parent’s world? Dan’s world or Simone’s world? Who is it that needs to be happy- the performer or the spectator? Something to think about . . .

Book Three of the Lives Trilogy, Splintered Lives:
Three dangerous men with nothing to lose offer a handsome reward to anyone willing to kill fourteen-year-old Brett McGovern. He does not know that he, his younger brother, and a friend are targets. More than anyone, these three men vow to kill George, whom they blame for forcing them to run and hide. A fun vacation turns into a nightmare and ends where it started, back on the Navajo Nation Reservation, high on a mesa held sacred by George and his grandfather.
Outnumbered and outgunned, George will make the ultimate sacrifice to protect his adoptive father and his adoptive brothers- but can he? Without knowing who these men are? Or where they are? Without knowing whom to trust? Is he prepared for betrayal that leads to his heartbreak and possible death? http://bit.ly/SplinteredLives