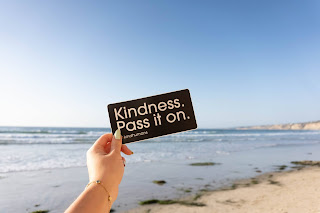 Two weekends ago, Kim and I, and Hannah and Alex, and one of Emily’s friends helped Emily and Q move into their new apartment in NC. Surprisingly, it went smoothly and quickly, unlike some moves Kim and I made in the past.

Emily decided to treat us with super large cinnamon rolls and muffins from a bakery just up the street from their old apartment. When I say super large, I really mean super large. The muffins were equally big.

There was a group of middle-age to older men sitting at a table outside, and one of them yelled, “Go Pride!” as she walked from her car into the bakery. It didn’t register for her. Sometimes Em concentrates so well, all else is blocked out.

Em stood at the counter waiting her turn, and one of the men stood behind her waiting for a refill of coffee. She offered the man her spot, knowing her order was large and might take more time than a simple splash of coffee in a cup. The man declined and told her to go ahead with her order.

He told her he was an alumnus of Greensboro College. They talked about school and such, and when the server told Em the amount, the man said, “I have it.” Em protested it was too much, but the man insisted. His buddy who was with him said, “He likes doing this all the time.” The man who paid for Em’s order said, “I like to give a daily blessing to someone, and today, it’s you. Be a blessing for someone else.” She thanked him. He smiled and left with his friend.

Recently, I noticed an uptick in the number of stories on Facebook and LinkedIn about acts of kindness, not just between humans, but also humans to animals. Each story makes me smile, and each story does my heart good.

A cop opens a drainage gate in the street, crawls in, and rescues baby ducklings who had fallen through the cracks. He places them on the street so the frantic mother duck can collect them and march on their way. A fisherman notices a sea turtle struggling to swim. He and a partner haul the turtle into the boat and they cut plastic netting from the turtle’s legs and shell and set the turtle free. Two swimmers roll and drag a beached baby shark back into the water.

An elderly woman stands on a street corner wanting to cross to the other side. Cars, trucks, and busses race by and don’t stop, so she stands patiently waiting for an opportunity to cross. It doesn’t come until a young man on a motorcycle spots her. He parks his cycle, and helps the lady cross the street, forcing cars and trucks to stop and wait until she is safely across and he safely returns to his cycle.

A young man walks past a homeless man. By his own admission, he walked past him hundreds of times and never noticed the homeless man wore cardboard and plastic bags on his feet. The young man goes into a store and comes back out with a pair of shoes for the man.

An older man on crutches struggled up a set of stairs in what looked like a train station. The man was not only on crutches, but he had to lug a suitcase. A big burley Oriental man stopped him. The older man climbed onto his back, and the Oriental man not only carried the man, but his crutches and his suitcase, too.

Acts of kindness, or in the words of the man in the bakery, a daily blessing.

I’m hoping this post and these stories bring a smile to your face. I hope this post and these stories warm your heart. Simple gestures done without payment, done without fanfare, and done without any expectation on the investment of money or time. Done simply to be kind. To be a blessing. Perhaps you and I can do the same. Give kindness to the unexpected. Be a blessing to someone in need- big or small, young or old, human or not. Make someone’s day, and you will find it not only makes that person’s day, but it will make your day too. Try it. Something to think about . . .

Oh, and Em, I never got that cinnamon roll. Catch you next time!

Betrayed: A Maxy Award Runner-Up for Mystery/Suspense! A Literary Titan Silver Book Award Winner! A Reader's Ready Recommended Read Award Winner!
A late-night phone call, a missing kid, a murdered family, but no one is talking. A promise is made and kept, but it could mean the death of a fifteen-year-old boy. Seeing is not believing. No one can be trusted, and the hunters become the hunted. https://amzn.to/2EKHudx

Spiral Into Darkness: Named a Recommended Read in the Author Shout Reader Awards!
He blends in. He is successful, intelligent and methodical. He has a list and has murdered eight on it so far. There is no discernible pattern. There are no clues. There are no leads. The only thing the FBI and local police have to go on is the method of death: two bullets to the face- gruesome and meant to send a message. But it’s difficult to understand any message coming from a dark and damaged mind. Two adopted boys, struggling in their own world, have no idea they are the next targets. Neither does their family. And neither does local law enforcement. https://amzn.to/2RBWvTm

Caught in a Web: A PenCraft Literary Award Winner! Named “One of the Best Thrillers of 2018!” by BestThrillers.com
They found the bodies of high school and middle school kids dead from an overdose of heroin and fentanyl. MS-13, a violent gang originating from El Salvador controls the drug trade along the I-94 and I-43 corridors. They send Ricardo Fuentes to find out who is cutting in on their business, shut it down and teach them a lesson. But he has an ulterior motive: find and kill a fifteen-year-old boy, George Tokay, who had killed his cousin the previous summer. Detectives Jamie Graff, Pat O’Connor and Paul Eiselmann race to find the source of the drugs, shut down the ring, and find Fuentes before he kills anyone else, especially George or members of his family. https://www.amazon.com/dp/B07CKF7696

Book Three of the Lives Trilogy, Splintered Lives:
Three dangerous men with nothing to lose offer a handsome reward if fourteen-year-old Brett McGovern is killed. He does not know that he, his younger brother, and a friend are targets. More than anyone, these three men vow to kill George, whom they blame for forcing them to run and hide. A fun vacation turns into a nightmare and ends where it started, back on the Navajo Nation Reservation, high on a mesa held sacred by George and his grandfather.
Outnumbered and outgunned, George will make the ultimate sacrifice to protect his adoptive father and his adoptive brothers- but can he? Without knowing who these men are? Or where they are? Without knowing whom to trust? Is he prepared for betrayal that leads to his heartbreak and possible death? http://bit.ly/SplinteredLives