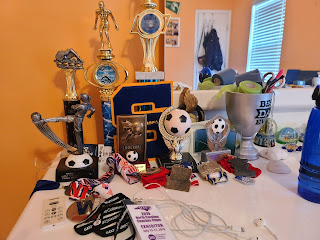 Memorial Day weekend was a rarity for us. Both girls, along with Hannah’s fiancé and Emily’s boyfriend, were home. I relish those moments. I loved hearing the stories, though I know I’m guilty of retelling some of my favorite ones. I love the laughter. It’s fun watching how they interact with each other. Emily and Hannah are as close as can be, perhaps more so friends than sisters. Alex and Q fit right in, and Kim and I love them all.

Mostly, I took the time to look at all the trinkets and keepsakes that brought back so many memories. Not so much sad, I think. Mostly poignant. Okay, it was sad, too.

All lined up on her dresser were snow globes from her trips to different cities and different countries she traveled to as part of her travel soccer team. On one corner of the dresser were the trophies and medals from soccer and swimming she earned. On the floor was an ancient swim cap from her summer swim team. A red swim bag sat in a corner in her room.

On the other corner of the dresser were seashell ornaments and jewelry. Some I had proudly given her. Some she received from others. Some she purchased herself. A jewelry box. Nothing fancy, just cute. There were earrings galore, bracelets, necklaces. Name it, it was there.

On her nightstand was her dolphin “thingy”. Not sure what to call it, but I remember her getting it. I remember the day, the time, and the fun we had. In her closet was the Donald Duck stuffed animal from our trip to Disney. Clothes no longer worn. Shoes and soccer cleats too small.

On her wall were pictures of friends, some dating back to elementary school, others from high school. All there. All smiling or clowning. I have my favorites.

Her bookshelf. Books in a series, all in order from first to last. Just of a few of the many she’s read over the years. Others given away or borrowed by her sister.

I remember going through this with Hannah. The same sorting of keepsakes and treasures. Some still in her bedroom. The same sad, poignant feelings. The same.

I admit that every now and then, I wander into Hannah’s room and sit and think and remember. I hold on to this memory, that memory. Moments we shared, moments kept only in my heart, not spoken about to anyone. I wander into Emily’s room and do the same. Mostly at night before bedtime. The stuff of dreams, perhaps.

In the coming weeks, there will be thousands, maybe millions of parents and kids doing the same thing we did with Emily, and once upon a time with Hannah. A cover closing on a chapter of life. A new book about to begin. Each bringing with it a bit of sorrow and wistfulness as a life about to begin ends a life once had. It’s exciting for the kids. Perhaps they are a bit frightened and anxious. And as exciting as it is for the kids, it is poignant for the parents, for mom and dad, who release their child into a new life. Helping them to fly off on their own.

Knowing and hoping that their son or daughter knows the door is always open. Hoping that every now and then they will walk through the door once again. Time and time again. To tell their stories. To share in their laughter, and perhaps in their frustration and their tears.

We grow. They grow. And as proud as we are of our kids as they pack up and move out and on, we are saddened at the passing of time, the passing of their years. The passing of our time and our years. Yes, both proud and sad. Something to think about . . .

The Lives Trilogy Prequel, Taking Lives:
FBI Agent Pete Kelliher and his partner search for the clues behind the bodies of six boys left in various and remote parts of the country. Even though they live in separate parts of the country, the lives of Kelliher, 11-year-old Brett McGovern, and 11-year-old George Tokay are separate pieces of a puzzle. The two boys become interwoven with the same thread Kelliher holds in his hand. The three of them are on a collision course and when that happens, their futures grow dark as each search for a way out. https://amzn.to/34nXBH5
Book One, Stolen Lives:
Two thirteen-year-old boys are abducted off a safe suburban street. Kelliher and his team of FBI agents have 24 hours to find them or they will end up like the other kids they found- dead! They have no leads, no clues, and nothing to go on. To make the investigation that much tougher, Kelliher suspects that one of his team members might be involved. https://amzn.to/3oMo4qZ
Book Two of the Lives Trilogy, Shattered Lives:
The boys are home, but now they have to fit back in with their families and friends. Their parents and the FBI thought the boys were safe. They were until people began dying. Now the hunt is on for six dangerous and desperate men who vow revenge. With no leads and nothing to go on, the FBI can only sit back and wait. A dangerous game that threatens not only the boys, but their families. https://amzn.to/2RAYIk2
Book Three of the Lives Trilogy, Splintered Lives:
Three dangerous men with nothing to lose offer a handsome reward if fourteen-year-old Brett McGovern is killed. He does not know that he, his younger brother, and a friend are targets. More than anyone, these three men vow to kill George, whom they blame for forcing them to run and hide. A fun vacation turns into a nightmare and ends where it started, back on the Navajo Nation Reservation, high on a mesa held sacred by George and his grandfather.

Betrayed: A Maxy Award Runner-Up for Mystery/Suspense! A Literary Titan Silver Book Award Winner! A Reader's Ready Recommended Read Award Winner!
A late-night phone call, a missing kid, a murdered family, but no one is talking. A promise is made and kept, but it could mean the death of a fifteen-year-old boy. Seeing is not believing. No one can be trusted, and the hunters become the hunted. https://amzn.to/2EKHudx
Spiral Into Darkness: Named a Recommended Read in the Author Shout Reader Awards!
He blends in. He is successful, intelligent and methodical. He has a list and has murdered eight on it so far. There is no discernible pattern. There are no clues. There are no leads. The only thing the FBI and local police have to go on is the method of death: two bullets to the face- gruesome and meant to send a message. But it’s difficult to understand any message coming from a dark and damaged mind. Two adopted boys, struggling in their own world, have no idea they are the next targets. Neither does their family. And neither does local law enforcement. https://amzn.to/2RBWvTm
Caught in a Web: A PenCraft Literary Award Winner! Named “One of the Best Thrillers of 2018!” by BestThrillers.com
They found the bodies of high school and middle school kids dead from an overdose of heroin and fentanyl. MS-13, a violent gang originating from El Salvador controls the drug trade along the I-94 and I-43 corridors. They send Ricardo Fuentes to find out who is cutting in on their business, shut it down and teach them a lesson. But he has an ulterior motive: find and kill a fifteen-year-old boy, George Tokay, who had killed his cousin the previous summer. Detectives Jamie Graff, Pat O’Connor and Paul Eiselmann race to find the source of the drugs, shut down the ring, and find Fuentes before he kills anyone else, especially George or members of his family. https://www.amazon.com/dp/B07CKF7696