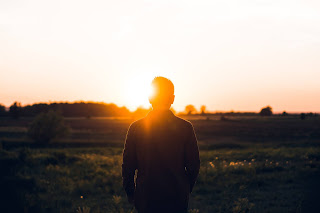 Way back in the early 80’s, two friends and I went camping one weekend at Devil’s Lake State Park. It’s one of my favorite places in the world. Hiking the bluffs. Swimming in the warm lake. The smell of campfire and pine. All of it.

Both mornings we were rudely awakened by the biggest, blackest crow I’ve ever seen. Loud and obnoxious. It called just as the sun came up and would not stop. It was on a branch of a tall pine tree that hung over our tent.

Hugh or Mike had enough, and one of them crawled out of the tent and threw stones at the crow to get it to move away from us. He failed. The crow never budged and taunted us with its call. Wake up!

Years later, after Kim gave birth to our daughter, Hannah, she would wake us up in the middle of the night to get her diaper changed and to have a bottle. Hannah was tiny. After I changed her diaper, I would sit in the rocking chair in her room, and feed her a bottle. I almost had to force-feed her. She wanted to sleep. She would start out staring at me intently, her tiny hands wrapped around my fingers (and my heart), and drink her bottle. But soon, I’d have to wake her up to drink some more. This routine began after she’d cry out to us. Wake up!

Now, it’s just Kim and me rattling around in our big house with our two dogs, Daisy and Stella. Kim gets up way early to do her running before it gets too hot. Each and every morning. I sleep in. Or at least, I try to sleep in.

Kim will let the dogs out to take care of their business, and usually Daisy will race to the back fence facing our woods and bark at something. A brown bunny. Sometimes deer. Rarely, a fox. But her barking wakes me up. Probably our neighbors too. Kim runs to get her away from the fence and into the house, but her barking wakes me up. I might doze off again. More times than not, I toss and turn, and finally get up.

I was reminded in my morning devotional about something called a “death clock.” You open it up, type in your age, when you were born, answer a few questions, and presto, it tells you when you are going to die.

My question is, who would want to know that? Why?

I think I prefer to not know. I would prefer to live my life happily and blissfully ignorant of when I might die. I’m not interested to know when my death might occur.

I believe that if we are focused on our death and what might become of us, we lose focus on living in the here and now. We lose the joy of each day and what each day brings to us. We lose the surprises of each day.

But I also know there is incredible joy in each day. There is joy in life and living. There is love. There is happiness. There is success. I know this too.

The Lives Trilogy Prequel, Taking Lives:
FBI Agent Pete Kelliher and his partner search for the clues behind the bodies of six boys left in various and remote parts of the country. Even though they live in separate parts of the country, the lives of Kelliher, 11-year-old Brett McGovern, and 11-year-old George Tokay are separate pieces of a puzzle. The two boys become interwoven with the same thread Kelliher holds in his hand. The three of them are on a collision course and when that happens, their futures grow dark as each search for a way out. https://amzn.to/34nXBH5
Book One, Stolen Lives:
Two thirteen-year-old boys are abducted off a safe suburban street. Kelliher and his team of FBI agents have 24 hours to find them or they will end up like the other kids they found- dead! They have no leads, no clues, and nothing to go on. To make the investigation that much tougher, Kelliher suspects that one of his team members might be involved. https://amzn.to/3oMo4qZ
Book Two of the Lives Trilogy, Shattered Lives:
The boys are home, but now they have to fit back in with their families and friends. Their parents and the FBI thought the boys were safe. They were until people began dying. Now the hunt is on for six dangerous and desperate men who vow revenge. With no leads and nothing to go on, the FBI can only sit back and wait. A dangerous game that threatens not only the boys, but their families. https://amzn.to/2RAYIk2
Book Three of the Lives Trilogy, Splintered Lives:
Three dangerous men with nothing to lose offer a handsome reward if fourteen-year-old Brett McGovern is killed. He does not know that he, his younger brother, and a friend are targets. More than anyone, these three men vow to kill George, whom they blame for forcing them to run and hide. A fun vacation turns into a nightmare and ends where it started, back on the Navajo Nation Reservation, high on a mesa held sacred by George and his grandfather.

Betrayed: A Maxy Award Runner-Up for Mystery/Suspense! A Literary Titan Silver Book Award Winner! A Reader's Ready Recommended Read Award Winner!
A late-night phone call, a missing kid, a murdered family, but no one is talking. A promise is made and kept, but it could mean the death of a fifteen-year-old boy. Seeing is not believing. No one can be trusted, and the hunters become the hunted. https://amzn.to/2EKHudx
Spiral Into Darkness: Named a Recommended Read in the Author Shout Reader Awards!
He blends in. He is successful, intelligent and methodical. He has a list and has murdered eight on it so far. There is no discernible pattern. There are no clues. There are no leads. The only thing the FBI and local police have to go on is the method of death: two bullets to the face- gruesome and meant to send a message. But it’s difficult to understand any message coming from a dark and damaged mind. Two adopted boys, struggling in their own world, have no idea they are the next targets. Neither does their family. And neither does local law enforcement. https://amzn.to/2RBWvTm
Caught in a Web: A PenCraft Literary Award Winner! Named “One of the Best Thrillers of 2018!” by BestThrillers.com
They found the bodies of high school and middle school kids dead from an overdose of heroin and fentanyl. MS-13, a violent gang originating from El Salvador controls the drug trade along the I-94 and I-43 corridors. They send Ricardo Fuentes to find out who is cutting in on their business, shut it down and teach them a lesson. But he has an ulterior motive: find and kill a fifteen-year-old boy, George Tokay, who had killed his cousin the previous summer. Detectives Jamie Graff, Pat O’Connor and Paul Eiselmann race to find the source of the drugs, shut down the ring, and find Fuentes before he kills anyone else, especially George or members of his family. https://www.amazon.com/dp/B07CKF7696