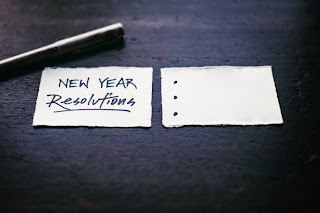 My sister, Betty, had a New Year tradition that I found funny, if not a bit strange. Each year, she would have a can of sardines open. At the stroke of midnight, in one hand, there would be a sardine on a fork and in the other hand, a dollar bill. I believe there was a third thing, but I can’t recall what it was. She said the sardine represented enough to eat in the coming year. The dollar bill represented enough wealth to get by in the coming year. I believe the third thing dealt with health in the new year. For Betty and her husband, they seemed to have enough food and enough money for them to get by. In her later years, her health failed, and she passed away. This was quite some time ago after she spent time a long time in a hospital. A sad ending to such a funny and kind lady. Someone who could and often did poke fun at herself. I loved, and still love, her much.

Fairly regularly, I’ve made resolutions going into the new year, only to backtrack and then forget the resolutions I’ve made. Lose weight. Get in shape. This. That. Whatever. Like I said, I never finished what I set out to do. I think that is common among most of us.

I will smile more.

Not that I don’t smile already, but I want to be more conscious of smiling more, because smiling, whether you realize it or not, can and will change one’s attitude. A smile is infectious. It spreads faster than Covid-19, and is certainly less painful and uncomfortable. A smile is a doorway for others to approach you, to interact with you. It is a welcome matt that sits in front of your heart and soul that says, “Hey, I’m okay, and you are too. Welcome!”

I will be kind.

I like to think that I am already kind, but I want to be intentional about it. I want to extend kindness to those who are unkind. I want to be kind to anyone without expectation of having kindness return to me. We already live in a world that can be cruel without knowing and is sometimes cruel purposely. We don’t have to be unkind. There are too many people who are suffering, who are fighting battles and demons. We don’t need to add to their tough fight. Be kind.

I will be gentle.

There are times when I can be harsh, sometimes rude. That is not my intention, honestly, but I know that my words will come out wrong sometimes, and I know that my actions can sometimes be perceived as uncaring. I want to be deliberately gentle to those around me, including being gentle with myself. I can be and often am my own worst nightmare when it comes to playing the if-I-could-have-would-have-should-have game. I am quick to focus on my own weaknesses and my own faults, rather than on my strengths and efforts. That needs to change.

This is the hardest one for me. While I can and often do (sometimes don’t) forgive those who have hurt me, I am relentless with those who hurt my family. I don’t have the patience with them to see that they are hurting, which is sometimes why people act without thinking and hurt those who I love. All I focus on is that my wife or one of my daughters is hurt. I think I need to remember that I can forgive, but I can learn to not forget. That doesn’t mean holding a grudge. It means that perhaps my trust won’t be misplaced again. It means that there is a lesson that was learned that won’t be repeated. I know this will take a great deal of strength and fortitude on my part, but I know I need to forgive.

If along the I can shed a few pounds (and I know I have many to shed), and if I can get off my butt and move more (I have been working at it consciously), all the better. But I think my resolutions for the coming year, for many years after this one, might do me and those whom I love, the most good. Something to think about . . .

This novel is an action-packed thriller that will keep the reader turning the pages. The descriptions of settings and characters are extremely well done, and the pacing is perfect. The ending ties up all the loose ends, yet you feel (and hope) there will be more from these characters in the future. Action and adventure are the words of the day in this thrilling, well-written, page-turner from Joseph Lewis.”

Spiral Into Darkness: Named a Recommended Read in the Author Shout Reader Awards!
He blends in. He is successful, intelligent and methodical. He has a list and has murdered eight on it so far. There is no discernible pattern. There are no clues. There are no leads. The only thing the FBI and local police have to go on is the method of death: two bullets to the face- gruesome and meant to send a message. But it’s difficult to understand any message coming from a dark and damaged mind. Two adopted boys, struggling in their own world, have no idea they are the next targets. Neither does their family. And neither does local law enforcement. https://amzn.to/2RBWvTm You can watch the book trailer at https://youtu.be/PrDxfbfqV_8
Caught in a Web: A PenCraft Literary Award Winner!
The bodies of high school and middle school kids are found dead from an overdose of heroin and fentanyl. The drug trade along the I-94 and I-43 corridors and the Milwaukee Metro area is controlled by MS-13, a violent gang originating from El Salvador. Ricardo Fuentes is sent from Chicago to Waukesha to find out who is cutting in on their business, shut it down and teach them a lesson. But he has an ulterior motive: find and kill a fifteen-year-old boy, George Tokay, who had killed his cousin the previous summer.

Detectives Jamie Graff, Pat O’Connor and Paul Eiselmann race to find the source of the drugs, shut down the ring, and find Fuentes before he kills anyone else, especially George or members of his family. https://www.amazon.com/dp/B07CKF7696  You can watch the book trailer at https://www.youtube.com/watch?v=xd3YdNv_ayQ