You Are the Gift! 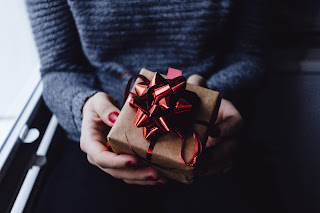 Like many of you reading this, our family is getting ready for Christmas, a short one week away. It is safe to say we are hyped for it!

The kids gave us their list of hopes and dreams, and Kim and I gave our list to the kids. Kim and I are going simple this year. One gift for the both of us. It’s all we need and really, all we want. And you can imagine the list we gave to the kids is much smaller than theirs, and I figure that’s the way it should be. Alex, Hannah’s husband, caused a smile. For the fifth or sixth year running, at the bottom of his list, he wrote, ‘ All the riches of the world.’

It’s interesting how the kids’ lists have changed over the years. Toys and movies, books and CDs to, well, books and clothes, and household items. Except for a few odds and ends, Kim and I are almost done shopping for them. It will be a great Christmas for everyone.

At the school where I work part-time, the faculty and staff take part in Secret Santa. I’ve noticed that a number of kids do this with each other. There is a dollar amount, but it’s safe to say that the suggested amount is pretty much ignored. My Secret Santa has treated me super well! And I think it’s also safe to say that as much as we enjoy the surprise of what we might find in our mailbox, there is more joy in the giving.

Most of us will be satisfied with something meaningful given with the warmest and best intentions. Doesn’t have to be great or grand, at least to anyone looking at it. But it will be great or grand because of who we receive it from and why it was given, whether or not it was big or small or fancy. It is the intention, the heart behind it.

In all cases, whether we know it or not, we are the gift!

Sharing a joke. Listening to someone in need. Our presence when words cannot be expressed adequately. Our touch. Our smile.

The gift of knowing that if someone needs anything- a kind word, a ride, a gesture, a touch- we are there. Yes, we are the gift. Always the gift. And it doesn’t cost a dime. Something to think about …

Books make wonderful Christmas presents! Inexpensive, and a good story lasts and will stick with the reader throughout life. Hint: I have nine available, and I hope you gift someone with one of my books.