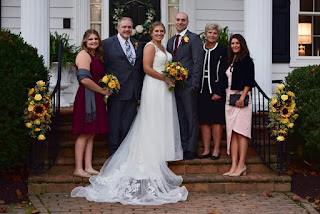 Growing up in Wisconsin, Christmas had snow. Usually, plenty of it. The cold air froze nose hair, and fingers and toes stung. Seldom, if ever, do I recall a Christmas without snow on the ground.

Kim and I lived in California for eleven years. No snow in Southern California or where we lived. I remember one year Kim and I took a walk in jeans and a sweatshirt just before the Wisconsin Badgers played a bowl game. One year, we grilled out and swam in the pool. Tough to conjure up thoughts of Christmas in a bathing suit.

We live in Virginia now, and a few times we had snow. One year, it snowed enough to shut down everything for almost a week. This year? It’s been gray and rainy. A few days, we had chilly weather, but not cold weather- at least by Wisconsin standards.

Kim, Emily and I decorated our house for the season. We’ve done most of our shopping, and the wrapping- I dread that part- awaits. Driving through our neighborhood, houses are decorated with Santas, reindeer, and snowmen. Some have Charlie Brown characters or other animations. Nothing like Clark Griswold. But pretty.

This week, Hannah and her new husband, Alex, will drive up to be with us. Emily arrives tonight or tomorrow, and her boyfriend will show up a bit later in the week. We’ll have our Christmas meal and open presents, laugh and play games, tell stories and laugh some more. There will be quiet moments and reading and naps, watching shows and movies. All comfortable and cozy.

Tough right now, I suppose, to get into the feeling of Christmas. No snow. Mild weather. Kind of gray and gloomy. No snow.

But I remind myself what Christmas is about. God on high sent his Son to the world, to us, as a gift. An ultimate gift. He shared his own being with us.

We as fathers and mothers, sons and daughters, give gifts out of love, not obligation. It is the act of giving that is important. The spirit with which we give, the reason we give, that is important. It isn’t the size of the stack of presents under the tree. It isn’t the number of presents we receive. It is the fact that someone thought enough of us to give us something we may have wanted, or dreamed about, or wished for.

And my thoughts drift to those moms and dads who can’t provide nearly enough, who can’t give what they would like to their sons and daughters because they lack. Yet, with breaking heart and hurt so deep, they too love their kids and want more for them than they have to give. But I know from my own background that those children will love whatever is given to them, because it was done out of love for them. They might not see the hurt their parents wear or feel the pain their parents shed. It is there, but in that moment of unwrapping a gift of love, it is love that is felt.

Christmas isn’t about tinsel or snow or colored lights. It isn’t about ornaments or lawn decorations.

From the Lewis Family:

we wish you a very Merry Christmas and Holiday Season.

As always, Live Your Life, and Make A Difference!

A Goodreads Giveaway for my new book, Blaze In, Blaze Out Began Friday, December 17 and will finish at 11:59 PM PT on Saturday, January 15. My Publisher, Black Rose Writing and I are giving away 5 copies to Goodreads members in U.S. To Enter the Giveaway, use this Link:

Blaze In, Blaze Out, is available for preorder until 1-6-22. Save 15% by using the promo code: PREORDER2021 it at my publisher’s website at: https://www.blackrosewriting.com/mystery/blazeinblazeout