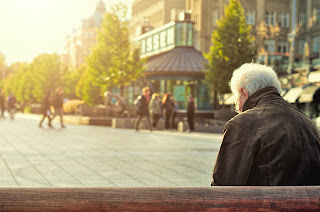 He lived in a red brick house on a quiet, older cul-de-sac in a burb of Richmond. He was friendly with the young couple who lived next door, and he was buddies with Sunny, an elderly lady who lived across the street.

Richard and Sunny would go to breakfast once a week, and Sunny would grocery shop for him. They were, after all, friends. Richard would take his garbage and recycling to the street by himself. The young man who lived next door had offered to do that for him, but Richard liked to do that himself. A pleasant, but independent man.

He and the young man would have conversations about many topics. One of Richard’s favorites was political, and he’d rant about the previous administration, while hoping for the best for the new administration. When in the yard, he’d wave at the young couple and they would wave back. Neighborly.

The young couple noticed Richard hadn’t been around in a while. They would watch for him, but neither had seen him. They wondered.

After several weeks, the young man asked Sunny if Richard was okay.

She explained Richard had fallen and had broken his arm. He had it mended, but was taken to a rehab center. When he wanted to come home, his daughter refused.

Richard was 103. Coherent. Aware. Intelligent. Friendly. Hadn’t suffered from any other malady.

Sunny told the young man that Richard had wanted to come home, but his daughter thought he was too much of a bother. So, not being able to have visitors because of Covid, not being able to go anywhere, Richard died alone in his room at the rehab center. Probably died more of a broken heart than the broken arm that got him there.

I don’t know why this story bothers me so. I mean, I didn’t know Richard. I think I saw him once from a distance. I’m a little over half of his age. I have a loving wife and two wonderful daughters. Hannah is engaged, and Emily probably will be too in a year or so after grad school.

Kim and I are in pretty good shape- Kim in much better shape than I am. Both of us independent, healthy. Nothing much in common with Richard.

I think back to July 2014 when Wil was shot and killed in Chicago. Though there were other pedestrians and drivers on the street, Wil was alone. By himself. And he died on the sidewalk alone. By himself. There are times I wish I would have been with him on that day. I don’t know what I would have said. Maybe something like, “It will be okay.” Maybe hold him. Something.

Richard wanted to come home. And like Wil, he died alone. Maybe that’s why Richard’s story affects me so. Maybe.

I hope that as I advance in age, I’m not a bother to Kim, or Hannah, or Emily. I hope they never feel I’m in the way. I hope I’m never in a place, in a room, by myself, alone, where I will die. I don’t want that. I pray that never happens to me, or to you, or to anyone. I don’t want to be like Richard. Something to think about . . .

To My Readers:
I am happy to announce that the Lives Trilogy and Prequel is now available for preorder! The links are below, and if you order now, you receive them at a 15% discount! I edited and revised each book. I am pleased with the results. I am thankful to BRW for their continued belief in me and in my writing. I hope you will rediscover, or perhaps, discover, the Lives Trilogy and Prequel.
The Lives Trilogy Prequel, Taking Lives:
FBI Agent Pete Kelliher and his partner search for the clues behind the bodies of six boys left in various and remote parts of the country. Even though they live in separate parts of the country, the lives of FBI Kelliher, 11-year-old Brett McGovern, and 11-year-old George Tokay are separate pieces of a puzzle. The two boys become interwoven with the same thread that Pete Kelliher holds in his hand. The three of them are on a collision course and when that happens, their futures grow dark as each search for a way out. https://www.blackrosewriting.com/thrillers/takinglives
Book One, Stolen Lives:
Two thirteen-year-old boys are abducted off a safe suburban street. Kelliher and his team of FBI agents have 24 hours to find them or they will end up like the other kids they found- dead! They have no leads, no clues, and nothing to go on. And, Kelliher suspects that one of his team members might be involved. https://www.blackrosewriting.com/thrillers/stolenlives
Book Two of the Lives Trilogy, Shattered Lives:
The boys are home, but now they have to fit back in with their families and friends. Their parents and the FBI thought the boys were safe. They were until people began dying. Now the hunt is on for six dangerous and desperate men who vow revenge. No leads and nothing to go on, the FBI can only sit back and wait. A dangerous game that threatens not only the boys, but their families. https://www.blackrosewriting.com/thrillers/shatteredlives
Book Three of the Lives Trilogy, Splintered Lives:
Three dangerous men with nothing to lose offer a handsome reward if fourteen-year-old Brett McGovern was killed. He has no idea that he, his younger brother, and a friend are targets. More than anyone, these three men vow to kill George, whom they blame for forcing them to run and hide.A fun vacation turns into a nightmare and ends where it started, back on the Navajo Nation Reservation, high on a mesa held sacred by George and his grandfather.
Outnumbered and outgunned, George is willing to make the ultimate sacrifice to protect his adoptive father and his adoptive brothers- but can he? Without knowing who these men are? Or where they are? Without knowing whom to trust? Is he prepared for betrayal that leads to his heartbreak and possible death? https://www.blackrosewriting.com/thrillers/splinteredlives

BETRAYED by Joseph Lewis 5 stars
Awesome read, hard to put down. Fast moving, great story of a family who adopted several boys who had nowhere to go. Some were Navajo. A problem came up on the reservation and one boy's friend was missing. Strange, dangerous things were happening. Great read.

I have an author's website, in addition to my Facebook Author’s Page.
On it, I talk about writing. I introduce characters from my books, and I introduce readers to other authors. I also release snippets from those books. Mostly, it is my way of reaching out to you so that you get to know my author side of life. You can find it at: https://jrlewisauthor.blog/
Other ways you can connect with me on Social Media:
Twitter at @jrlewisauthor
Facebook at: https://www.facebook.com/Joseph.Lewis.Author
Amazon at: http://www.amazon.com/Joseph-Lewis/e/B01FWB9AOI /
Betrayed: A Maxy Award Finalist! A Literary Titan Silver Book Award Winner! A Reader's Ready Recommended Read Award Winner!
A late-night phone call, a missing kid, a murdered family, but no one is willing to talk. A promise is made and kept, but it could mean the death of a fifteen-year-old boy. Seeing is not believing. No one can be trusted, and the hunters become the hunted. https://amzn.to/2EKHudx
Spiral Into Darkness: Named a Recommended Read in the Author Shout Reader Awards!
He blends in. He is successful, intelligent and methodical. He has a list and has murdered eight on it so far. There is no discernible pattern. There are no clues. There are no leads. The only thing the FBI and local police have to go on is the method of death: two bullets to the face- gruesome and meant to send a message. But it’s difficult to understand any message coming from a dark and damaged mind. Two adopted boys, struggling in their own world, have no idea they are the next targets. Neither does their family. And neither does local law enforcement. https://amzn.to/2RBWvTm
Caught in a Web: A PenCraft Literary Award Winner! Named “One of the Best Thrillers of 2018!” by BestThrillers.com
The bodies of high school and middle school kids are found dead from an overdose of heroin and fentanyl. The drug trade along the I-94 and I-43 corridors and the Milwaukee Metro area is controlled by MS-13, a violent gang originating from El Salvador. Ricardo Fuentes is sent from Chicago to Waukesha to find out who is cutting in on their business, shut it down and teach them a lesson. But he has an ulterior motive: find and kill a fifteen-year-old boy, George Tokay, who had killed his cousin the previous summer. Detectives Jamie Graff, Pat O’Connor and Paul Eiselmann race to find the source of the drugs, shut down the ring, and find Fuentes before he kills anyone else, especially George or members of his family. https://www.amazon.com/dp/B07CKF7696
Book One of the Lives Trilogy, Stolen Lives:
Two thirteen-year-old boys are abducted off a safe suburban street. Kelliher and his team of FBI agents have 24 hours to find them or they’ll end up like all the others- dead! They have no leads, no clues, and nothing to go on. And the possibility exists that one of his team members might be involved.
Book Two of the Lives Trilogy, Shattered Lives:
Six men escaped and are out for revenge. The boys, recently freed from captivity, are in danger and so are their families, but they don’t know it. The FBI has no clues, no leads, and nothing to go on and because of that, cannot protect them.
Book Three of the Lives Trilogy, Splintered Lives:
A 14-year-old boy knows the end is coming. What he doesn’t know is when, where, or by whom. Without that knowledge, the FBI can protect him or his family. And he cannot protect himself or his family.
The Lives Trilogy Prequel, Taking Lives:FBI Agent Pete Kelliher and his partner search for the clues behind the bodies of six boys left in various and remote parts of the country. Even though they don’t know one another, the lives of FBI Kelliher, 11-year-old Brett McGovern, and 11-year-old George Tokay are separate pieces of a puzzle. The two boys become interwoven with the same thread that Pete Kelliher holds in his hand. The three of them are on a collision course and when that happens, their lives are in jeopardy as each search for a way out.