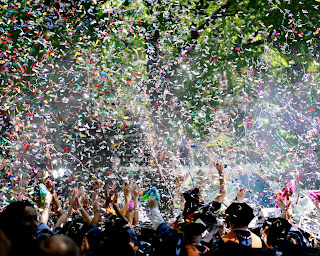 This time of year, I would normally be knee deep in preparation for the end of the year and commencement. There would have already been at least two meetings with all of those who handle everything from parking to flowers, to stage rental and set up, to sound and music. Normally, there would be at least twenty people involved to some extent, with many, many more helping silently and with little recognition. They are the ones who truly make it happen.

By this time, I would have practiced my “principal address” which is actually a song I picked out that represents the class, or represents a significant event, or something meaningful that I needed to “say” to them before they cross the stage to pick up their diploma. Last spring, I had actually settled on one of three songs I felt fit the occasion and this class, the class of 2021.

There are so many seniors that mean a great deal to me- present tense, not past tense. Many still are in touch with me thanks to texts and other social media. I wrote letters of recommendation for many of them, not only to get into a college or university, but for scholarships and other financial aid. Much like I did during my last year as a coach, I had planned to “graduate” with my seniors. So, I wanted this year to be special for them and for me, since this would be my last as a principal.

Just before Spring Break last year, I retired. Going into a year with the pandemic and the uncertainty of the school year, I felt I needed to step down. As much as that decision hurt, and it truly did hurt, I feel as I write this, that it was the best decision for me and for my family, and for the kids at the school.

44 years in education is a long haul. Still, I wasn’t quite done. A friend and former administrative colleague called me and asked me for a favor. He needed someone to be a long-term substitute in his third grade. I doubted my own abilities since I had never taught any grade lower than seventh, and that was almost forty years ago. But I did and had a blast. The team of teachers I worked with led me, worked with me, cheered me on, and I enjoyed every minute. I hated to see it end.

Then, I received another call from another administrative colleague and asked me to be his facilitator for kids working online. I work thirty hours a week and I love that. I plan to continue in the same role next year, my forty-sixth year in education. I get to work with kids again. I get to rub elbows with other teachers. As I said, I’m having a blast.

To those who have kids participating in commencement, congratulations. Hold tight to that moment and those memories. It’s one more stepping stone on their way to adulthood.

To those young men and women who are participating in commencement, congratulations. I will be with you in spirit. I hope many of you will have fond memories of our interactions together. I am proud of each of you. As I said, I will be there with you as you process in, march across the stage, and as you process out. Throw a confetti stick for me. Maybe throw a cap. Have fun. Enjoy yourself. It is a special moment. Embrace it. God Bless! Something to think about . . .

FBI Agent Pete Kelliher and his partner search for the clues behind the bodies of six boys left in various and remote parts of the country. Even though they live in separate parts of the country, the lives of FBI Kelliher, 11-year-old Brett McGovern, and 11-year-old George Tokay are separate pieces of a puzzle. The two boys become interwoven with the same thread that Pete Kelliher holds in his hand. The three of them are on a collision course and when that happens, their futures grow dark as each search for a way out. https://www.blackrosewriting.com/thrillers/takinglives

Two thirteen-year-old boys are abducted off a safe suburban street. Kelliher and his team of FBI agents have 24 hours to find them or they will end up like the other kids they found- dead! They have no leads, no clues, and nothing to go on. And, Kelliher suspects that one of his team members might be involved. https://www.blackrosewriting.com/thrillers/stolenlives

The boys are home, but now they have to fit back in with their families and friends. Their parents and the FBI thought the boys were safe. They were until people began dying. Now the hunt is on for six dangerous and desperate men who vow revenge. No leads and nothing to go on, the FBI can only sit back and wait. A dangerous game that threatens not only the boys, but their families. https://www.blackrosewriting.com/thrillers/shatteredlives

Three dangerous men with nothing to lose offer a handsome reward if fourteen-year-old Brett McGovern was killed. He has no idea that he, his younger brother, and a friend are targets. More than anyone, these three men vow to kill George, whom they blame for forcing them to run and hide. A fun vacation turns into a nightmare and ends where it started, back on the Navajo Nation Reservation, high on a mesa held sacred by George and his grandfather.

On it, I talk about writing. I introduce characters from my books, and I introduce readers to other authors. I also release snippets from those books. Mostly, it is my way of reaching out to you so that you get to know my author side of life. You can find it at: https://jrlewisauthor.blog/

Other ways you can connect with me on Social Media:

A late-night phone call, a missing kid, a murdered family, but no one is willing to talk. A promise is made and kept, but it could mean the death of a fifteen-year-old boy. Seeing is not believing. No one can be trusted, and the hunters become the hunted. https://amzn.to/2EKHudx

Spiral Into Darkness: Named a Recommended Read in the Author Shout Reader Awards!

He blends in. He is successful, intelligent and methodical. He has a list and has murdered eight on it so far. There is no discernible pattern. There are no clues. There are no leads. The only thing the FBI and local police have to go on is the method of death: two bullets to the face- gruesome and meant to send a message. But it’s difficult to understand any message coming from a dark and damaged mind. Two adopted boys, struggling in their own world, have no idea they are the next targets. Neither does their family. And neither does local law enforcement. https://amzn.to/2RBWvTm

The bodies of high school and middle school kids are found dead from an overdose of heroin and fentanyl. The drug trade along the I-94 and I-43 corridors and the Milwaukee Metro area is controlled by MS-13, a violent gang originating from El Salvador. Ricardo Fuentes is sent from Chicago to Waukesha to find out who is cutting in on their business, shut it down and teach them a lesson. But he has an ulterior motive: find and kill a fifteen-year-old boy, George Tokay, who had killed his cousin the previous summer. Detectives Jamie Graff, Pat O’Connor and Paul Eiselmann race to find the source of the drugs, shut down the ring, and find Fuentes before he kills anyone else, especially George or members of his family. https://www.amazon.com/dp/B07CKF7696