Marble and a Blank Page 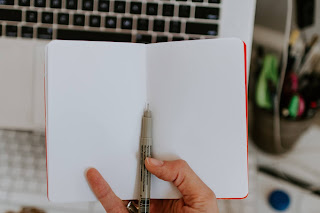 When I begin writing, the page is blank. Nothing on it except a blinking cursor. Yet, I have this idea, sometimes a question, that pops into my mind. More than likely, the idea or question has been percolating for a while before I pull out my trusty laptop and begin pecking at the keyboard.

I call it, “Pre-writing in my head.” Sometimes, I don’t hear what Kim or the girls are saying to me because I’m wrestling with the idea and perspective. I can tune them and the world out as I work it out, and when I write.

I think the idea or question through. I look at various scenarios. I come at it from different perspectives. Finally, when I begin writing, I’ve settled on one perspective, though that might change as I write. I think that happens to many writers.

There seems to be an argument or debate among writers whether it is best to write with the end in mind. Some, including me, don’t know the final scene until it is written. In fact, for me at least, the end is nowhere in sight when I begin my next story. It is only about the half-way point that I catch a glimpse of it, but it is only a glimpse. And it is distant, and its shape is not recognizable.

The end of any of my stories depend upon the characters. Now I realize that the characters come from me and my imagination, but still, when I’m constructing dialogue and action, characters come to life and they develop a mind of their own. Much of what they do and the interplay between them moves the story forward, and the reader (and the writer) arrives at an ending.

In my latest novel, Betrayed, I didn’t know what the end would be until I wrote it. Seriously. I began writing the ending scene (in the Epilogue). The characters had their say, or not, and “it happened.” There was a scene towards the end of the book when Brian sat in the dark of a bar/diner writing two letters, that pointed towards the ending, but even then, at that point, I didn’t know what the ending would be. Brian knew what he faced. He knew what was ahead of him and his brothers.

That scene with Brian was emotional for me. I wept. I struggled to get Brian’s feelings and what he had to say right. I believe I did, at least for him. It isn’t perfect in the sense that he’s a sixteen-year-old boy, and after working with kids for forty-four years, sixteen-year-olds don’t necessarily get it right. Close, but usually not on the money.

I have to say that the ending in Betrayed is one of my favorite endings of anything I’ve written. It’s human. It’s raw, and it has a heart. It is satisfying, even in a somewhat unfinished and questioning way. Like life, I guess.

Back sometime ago, I heard a story about Michelangelo. He is quoted as saying, “Every block of stone has a statue inside it, and it is the task of the sculptor to discover it.” He also said, “I saw the angel in the marble and carved until I set him free.”

Now, I am no Michelangelo. I am not James Patterson or John Sandford or Stephen King, who are three of my heroes in writing. I also don’t pretend to be. I make no pretenses for who I am or what I write.

There is a point to this, however.

In life, we are faced with a blank page or a block of granite. Each minute of each day, we make choices and make decisions. We can choose to begin pecking away at the keyboard until we see the possibility of an ending, or like Michelangelo, we can look at a block of granite and see the angel. We might see an ending or we might not. What we decide to do or say, how we act or react in the minute or day we have in front of us is up to use. We can write our own endings. We can carve our own block of granite. Make it satisfying – for us and for those around us. The choice it up to us. Something to think about . . .

Betrayed is now available for Kindle preorder to KDP Select at Amazon at:
https://amazon.com/dp/B08GCTV2XH  and it is also available in print at: https://blackrosewriting.com/thrillers/betrayed

A late-night phone call, a missing kid, a murdered family, and no one is talking.

“To call Betrayed a thriller alone would be to do it a disservice. It’s a social inspection of Navajo reservation culture and life, and its probe of the roots of love and connection are wonderfully woven into a story of adversity and the struggle to survive on many levels. These elements make Betrayed particularly recommended for readers who look for psychological depth and complexity from a story of violence and evolution.”
—    Diane Donovan, Editor; Donovan's Literary Services; Midwest Book Review/Bookwatch; Author of San Francisco Relocated.

Book Two of the Lives Trilogy, Shattered Lives:
Six men escaped and are out for revenge. The boys, recently freed from captivity, are in danger and so are their families, but they don’t know it. The FBI has no clues, no leads, and nothing to go on and because of that, cannot protect them. http://tinyurl.com/Shattered-Lives-J-Lewis
Book Three of the Lives Trilogy, Splintered Lives:
A 14-year-old boy knows the end is coming. What he doesn’t know is when, where, or by whom. Without that knowledge, neither he nor the FBI can protect him or his family. http://tinyurl.com/Splintered-Lives-J-Lewis