Lessons From a Kayak 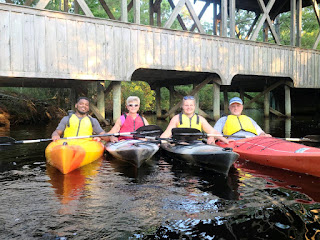 Just returned from a week-long vacation at the beach. Not crowded, and we pretty much kept to ourselves. Spent more time in the pool at the house than we did at the beach. Our two daughters, Hannah and Emily, came with us, along with their significant others, Alex and Q (Quaevon, but everyone calls him Q). Family friends joined us from Wisconsin with their three kids. A great time! Relaxing, enjoyable, peaceful. Hated to leave.

One evening, Kim, Emily, Q and I went on a kayak trip. We had a guide, a free spirit kind of guy who didn’t seem to want to settle down just yet, who helped us get in and out of the small craft, as well as guide us on our journey. Scotty, our guide, gave us interesting facts about the area and the history, and was entertaining.

I am not particularly comfortable in water. Neither was Q, though he wasn’t saying anything. I didn’t either, but I’m sure Kim and Emily read my expressions and body language. I’m not an outstanding poker player, so it was easy for them. Thankfully, both have a swimming background and both are or have been lifeguards, so I felt pretty safe.

Getting in was a chore. The kayak rocked and rolled. I was instructed to sit on the dock, place my feet into the kayak and then my butt. Sounds easy, right? Hmmm, not so much for me. After a whole lot of hesitation and perhaps any number of reasons why kayaking might not be in my best interest, I managed with the guide’s help. It wasn’t pretty, and I dared not look anyone in the eye for quite a while.

Okay, so far, so good. I have to tell you I relaxed quite a bit when Scotty told us he doubted that anyone would capsize, but it we did, just stand up. The water was at most three feet. Okay, got that! Sounded good to me.

Scotty instructed us how to hold the paddles, how to go forward and back, and how to stop. Seemed easy enough. I managed to not run into anyone.

The trip was benign. Tame. It lasted for about an hour and a half from start to finish. After about the first half-hour, I relaxed. I wanted to shift my legs to get myself more comfortable and the boat would sway first one way and then the other, so I settled in for the duration, not willing to risk it. Cramped comes to mind.

We saw the only covered bridge in all of North Carolina. Several osprey. The evening was not overly warm compared to the furnace blast of heat throughout the day (actually throughout the entire week).

When our adventure ended, I had to get out of the kayak. Hmmm . . . I didn’t want to repeat the entry into the kayak. I didn’t. It was worse. Sort of a barrel-role onto the pier. Way ugly. Happy no one captured it on film. I sheepishly took off my life vest and deposited it into the tub to be cleaned for the next group, wiped off the sand and gunk from my shirt, swimsuit and backside, and then stood waiting for the rest of our party.

I learned a few things on that trip. Some lessons.

Fear of the unknown and the uncomfortable can be paralyzing. Don’t let it. Dive in and take chances.

Trust your guide. It is okay to not know everything. There are others better suited for leadership of some tasks and in some situations. There are others who know more than you about certain things. That’s okay, and it is normal. It doesn’t mean you are a dummy, even though you might want to label yourself as such. Don’t.

Balance, not only in a kayak, but also in life. Keep it. Don’t lean too far one way or the other. Steady your course, but take chances.

Did I mention that fear of the unknown and uncomfortable can paralyze? Yup, I did, but I wanted to repeat it. Our minds our powerful. Our imaginations are powerful. The messages we tell ourselves can harm us and cause us to shrivel up and wither away. Don’t let fear prevent you from living life, from loving life. There is too much out there to love and enjoy. Go live it. Go paddle your own kayak through life. It’s worth it. Something to think about . . . 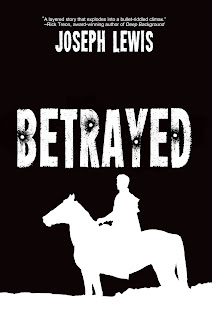 Book Two of the Lives Trilogy, Shattered Lives:
Six men escaped and are out for revenge. The boys, recently freed from captivity, are in danger and so are their families, but they don’t know it. The FBI has no clues, no leads, and nothing to go on and because of that, cannot protect them.http://tinyurl.com/Shattered-Lives-J-Lewis

Book Three of the Lives Trilogy, Splintered Lives:
A 14-year-old boy knows the end is coming. What he doesn’t know is when, where, or by whom. Without that knowledge, neither he nor the FBI can protect him or his family.http://tinyurl.com/Splintered-Lives-J-Lewis

The Lives Trilogy Prequel, Taking Lives:
FBI Agent Pete Kelliher and his partner search for the clues behind the bodies of six boys left in various and remote parts of the country. Even though they don’t know one another, the lives of FBI Kelliher, 11-year-old Brett McGovern, and 11-year-old George Tokay are separate pieces of a puzzle. The two boys become interwoven with the same thread that Pete Kelliher holds in his hand. The three of them are on a collision course and when that happens, their lives are in jeopardy as each search for a way out.http://tinyurl.com/Taking-Lives-J-Lewis