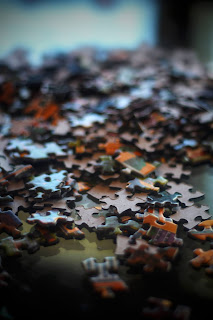 Over the Christmas holidays, our family has a mini-tradition of putting together a puzzle. You know, one of those 1,000 piece things that is a picture of a landscape or face. Sometimes, we work on a puzzle when we have snow days.

It isn’t necessarily an organized affair. Someone, Kim or her mother, maybe Hannah or Emily will spread out the puzzle on a table. The cover of the box is propped up so as we place the pieces together, we have a guide, something to go by. It makes it easier.

I don’t usually take part for very long. I am content to sit, watch and listen as I read or watch TV, sometimes as I write. Every now and then, I will sit in with them and put a piece or two together.

I am usually admonished, counseled, guided, and chided to begin on the outer edges and work inward. Usually, it is Kim who corrects my feeble attempts. I might continue to work on it in my own way, or I might take her correction and follow her suggestion.

The whole process takes time. The workers get up and leave for a snack, a meal, to do something else. Yet, they . . . we . . . return if nothing more than to check on the progress. More than likely, the workers who took a break come back to work on it again. There is quiet conversation. Laughter. Some reminiscing. In our family, quite a bit of teasing. All of it fun and enjoyable.

Eventually, the puzzle is pieced together and the picture resembles the cover of the box we used as a guide. There is a feeling of satisfaction, of accomplishment. The puzzle will remain on the table for a day or so, then taken apart, placed back into the box, and the box put away for another day, another time.

The puzzle eventually gets put together. Sometimes later rather than sooner. Kim’s way of working the outer edges works. My way, to just jump in and build as I see it works. Kim’s way is faster. My way is slower. But, they both work. The puzzle gets completed, finished.

In my mind, putting the puzzle together is second to the conversation, the laughter, the reminiscing. That is the real benefit of the puzzle. Teamwork, without calling it that, I guess, but so much more than that. As we work on the puzzle, someone finds a piece that works with someone else’s piece. There is sharing, giving, and taking.

Lastly, the cover of the box. The guide. The picture on the cover exists for a reason. Someone took the time to take the take the picture and cut the pieces up to make an interesting puzzle for us to work on. Without the guide, the work would be that much harder, if not almost impossible.

So, what can we learn from the puzzle?

That there is more than one way to solve it, to put the puzzle together. Working from the outside in or working somewhere within, works. Perhaps more quickly or slowly, but both work just fine. That, while completing the puzzle by one’s self can be done, it is so much more enjoyable when others lend a hand. We learn from one another. We help each other. There is joy in the process. Lastly, it isn’t the puzzle per se, that is the end goal, although the final product is satisfying. It is the process of storytelling and joking and teasing that, for me at least, is the highest value. It is the process of watching what others do, learning from it and working together to solve the puzzle that works for me. All of it has its place. Some in greater part than others.

Perhaps that is the gift we can give our kids, each other. The gift, not of the puzzle, but of the process the puzzle produces. That is the real gift, after all. Isn’t it? Something to think about . . .

To My Readers:
A late-night phone call, a missing kid, a murdered family. No one willing to talk, and three brothers are in danger.
My new book, Betrayed is available for preorder at https://www.blackrosewriting.com/thrillers/betrayed Use promo code: PREORDER2020 for a 15% discount.

Betrayed will debut Nov. 12, 2020! It is a contemporary psychological thriller using some of the same characters from my previous work. It takes place on the Navajo Nation Reservation in northeast Arizona.

Integrity is protecting someone who betrayed you. Courage is keeping a promise even though it might mean death.

A late-night phone call turns what was to be a fun hunting trip into a deadly showdown. Fifteen-year-old brothers George Tokay, Brian Evans and Brett McGovern face death on top of a mesa on the Navajo Nation Reservation in Arizona. They have no idea why men are intent on killing them.