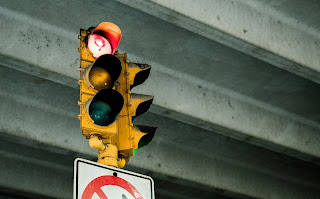 I’m sure at some point when you’re driving down the road, you encounter a car with a turn signal on. You’re driving and wondering if and when that car will change lanes or actually turn. This could go on for yards or miles, one never knows! Perhaps the car eventually changes lanes or turns off. Other times . . . And embarrassingly, I have to admit that I’ve done this myself. The turn isn’t great enough to automatically turn off the blinker, so I’m driving along oblivious that my car is sending other drivers an unintentional signal.

At times, the opposite occurs.

You might be driving along when all of a sudden a car jumps into your lane without a signal, without a notice, and at the last moment. You have to slow down. Sometimes you slam on the brakes and lay on the horn. Maybe you’ve given them some other sort of silent . . . or not . . . communication. A hand gesture, perhaps (not that I’ve ever done that, mind you- at least not today, so far).

Our youngest, Emily, has been known to be oblivious to signals guys give her. While in high school, a guy texted her and asked if she wanted to go get ice cream at Carl’s. Now, this guy lives waaaay out and it would be quite the drive for him. Emily decided that she didn’t want ice cream. (Kim and I just shook our head). Days later, this same young man does the same thing. Again, Emily decides that she is in the middle of homework or a book or a movie or she’s tired or . . . Kim and I shook our head and one of us suggests that perhaps, the boy wasn’t so much interested in ice cream as he was in seeing her. She looks at us blankly and asks, “Really?” (Kim and I just shook our head).

Her current boyfriend tells the story of how they first met, or rather, sort of met. It took time.

He is a football player, Emily is a soccer player. They were on the turf field messing around, not at practice. Just messing around enjoying the sun and nice weather. He kept looking over at her. Emily mentioned to one of her teammates that “This guy keeps staring at me.” Her friend smiled and shook her head. Later that same day eating lunch in the cafeteria, Emily is sitting at a table with her friends when this same young man enters with a group of his friends, sees her and waves. Emily sees him and quickly puts her head down. Even she can’t explain why she did that. (As I write this, I shake my head).

Each of us send and receive signals to and from individuals around us all day long. Sometimes the signals are obvious, sometimes not so much. A smile. A frown. Head down and hands in pockets. ‘Sad eyes.’ A blush. Someone lingering nearby, sometimes someone’s absence.

Sometimes what is said isn’t as important as the way it was said. Sometimes the message is hidden or couched in between the words used, and sometimes it is not so much the words used, but the absence of the words that could have been used that is the real message.

Hannah teaches fifth grade. Earlier this year, a boy asked her if she was married. She smiled and said, “No, but I have a boyfriend.” He blushed, nodded, and walked away head down.
There was a message that wasn’t expressed through his words.