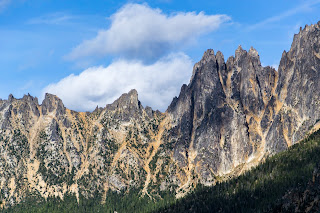 Way, way back when my younger brother was about to be married, which was shortly after my father passed away, our big family gathered in a living room so we could view some of my father’s slides he had taken over the years. It was fun seeing everyone as we grew up (though some of us don’t necessarily act our ages still). The older hair and clothes styles. Games we used to play. Trips we had taken, especially the camping trips.

My dad had a good eye, but sometimes his execution wasn’t the best. There were plenty of pictures with a thumb in the way. A few pictures of cracks in a sidewalk or of ceilings when the camera moved as the picture was taken. But these pictures caused laughter because it was a “dad” thing and we were used to it. Nice memories.

Ever take a picture of something you want to remember only to look at it later and it’s fuzzy? It happens to me often. Fortunately, we don’t have to waste money on a fuzzy picture, but can delete it if we want. Still, the idea behind taking the picture at that moment was to capture a memory and having the picture fuzzy (or a thumb in the way) is frustrating.

I think people, kids in particular, have Jagged Edges. We sometimes don’t fit nicely or cleanly into a perfect frame. There is fuzziness in our lives that sometimes causes the picture to be out of focus. Sometimes, we’re out of focus, fuzzy and jagged.

Sometimes, our expectation is that others who pop in and out of our lives, kids in particular, fit in this nice frame we have for them. It’s our frame, therefore, they should fit it, right?

We aren’t perfect no matter how hard we try to be, so how can we expect kids to be?

They leave us. They grow up, move on, and move out. Sometimes we hear from them because they come back to visit. Sometimes we receive a letter, or not, or get a message from one on Facebook.

While they are with us, we might not know what will become of them. We do our thing. We teach. We counsel. Sometimes we talk with them. With a little luck and a whole lot of patience, sometimes we are able to smooth out some of the Jagged Edges, clear up some of the fuzziness.

Some of us will not have that one “Rudy Story” movies are made of. Instead, most of us will plant seeds. And like any seed, it takes time for the seed to grow. We might never know what fruit that seed brings. But if we do it right, with love and compassion, with kindness and care, mostly with patience, we can be certain that the seed we plant today will bring about a beautiful result. And who knows, we might smooth out some of those Jagged Edges. We might even smooth out some of our own Jagged Edges. Something to think about . . .

The free Kindle promotion for my new book, Spiral Into Darkness has ended, but it is still available (and not that expensive).

I play with the question, Is a serial killer born or made? There are two sub-themes one of family and one on sexuality, and all three collide at the conclusion.

I received a Five Star Review from Best Thrillers! In part, it reads:
“The Bottom Line: A thoroughly compulsive police procedural by one of America’s most promising new writers. Joseph Lewis, author of our Best of 2018 pick Caught in a Web, is back with another crime thriller featuring world-weary Milwaukee detective Jamie Graff . . . While Lewis savagely explores romance, drama, and sexuality with his wider cast of characters, Jamie’s interpersonal life is refreshingly free of drama for a cop, enabling him to be the determined, resourceful rock capable of cracking the case. The result is a thoroughly compulsive crime thriller.” Best Thrillers