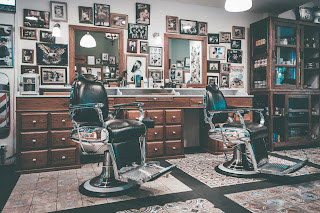 I get my hair cut, what little I have left, about every ten days. I’m sort of particular, in that I get a modified flattop. Instead of looking like the top of an aircraft carrier, I like it rounded on the sides almost in a crew cut fashion.

Kim, the owner, or Sue do my hair and have been doing so for at least two years, probably longer. We’re friendly. We say hi, participate in small talk. Probably the same as you do with your barber or hair dresser.

I watch Kim’s hands fly using an electric razor as well as with a scissors. Her expression is serious. Frowning, squinting, snipping. Once she begins cutting, there isn’t much said by either of us. I recognize, as she does, that her business is made in volume, not in the cut. So, I let her work and I’m sure she appreciates that.

Towards the end of my most recent visit, I remarked to her that her hands are so skilled. That caused her to blush. She stopped for a moment and pointed to a scar on her wrist. She said that when she was younger and still living in Korea, she was working in a factory and had an accident where she nearly lost her entire arm. She was only nineteen or twenty, but her doctor would not cut off her arm unless he had to.

She went on to say that the doctor had to insert a wire to serve as a tendon so she could flex her two middle fingers. It was touch and go and for a time, neither she nor her doctor were sure whether or not the surgery would be successful. Even at that, she had to endure two more surgeries. The only thing remaining from that accident is the small scar on her wrist and one on her shoulder that I never saw or knew existed.

Almost as an aside, she explained in embarrassment that some people notice her scar and wonder if she had tried to do harm to herself. She said, “Why would I do that? I have a wonderful life!”

Finally, she said that at age twenty-one, she came to the United States to begin a new life. She didn’t know anyone and didn’t have a job. She was terrified, but it was something she had wanted to do. She left her family behind to start brand new. Today, she married and now owns her barbershop.

The remarkable thing to me is that for about two years, I’ve been getting my hair cut by her or one of her associates and I never knew her story. I never knew her background. In fact, I can’t recall ever noticing the scar on her wrist. And the only way I found out anything about her was when I complemented how skilled her hands were.

I Took the Time to extend myself, to complement her, and she responded.

You know, we move through our lives moment by moment, hour by hour, day by day, and I wonder how many other stories there are. People we come into contact with, smile at, small talk with, transact with, and move on. We don’t get to know them even on a semi-personal level, certainly not on an intimate level.

I see kids in the hallway who I say hello or good morning to. I have teachers and staff members who I work with in my building. Many I know some things about. Others, well, not so much. Those same kids, those same adults I work with, I wonder what stories they have. What their secrets are. What their stories are. What their worries, their hopes, their dreams are. As one superintendent used to ask me when I saw him, “What keeps you up at night?” My conversation with Kim, my barber, caused me to wonder that about the kids I see and the adults I work with.

And it occurred to me that I don’t know them as well as I should, not the kids and not the adults. Perhaps, they don’t know me either. That’s on me, not them. My bad.

I’m wondering if we might extend ourselves a little. It could begin with a complement or a comment. We might uncover a wonderful, sometimes a tragic, story. We might find something amazing and interesting that might warm our heart. We might discover that there is a similarity, a sameness between the two of us. We might encounter a revelation that causes us to appreciate that unknown clerk, that unknown mail carrier, that unknown kid sitting in the back of the room, walking the hallway, sitting in the cafeteria by him or herself. The person whose mailbox is next to mine, yours. Only if we Take the Time. If only. Something to think about . . .

My new book, Spiral Into Darkness launches on Thursday, January 17 on Amazon and Barnes & Noble. Currently, it is Available for Preorder! Use the promo code: PREORDER2018 to receive a 15% discount at http://www.blackrosewriting.com/suspense…/spiralintodarkness