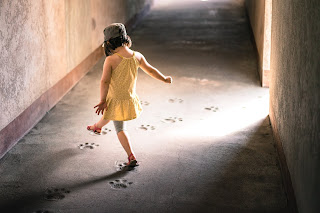 I read a passage about two weeks ago that has stuck with me and has played on my heart. A pastor wrote that growing up in the mountains of North Carolina, snow was sometimes heavy. When he was little, his father would take him out and tell him to follow in his footsteps so it would be easier for him.

But kids being kids, he’d stray to one side or the other, find himself stuck, and call out for help. His father would pick him up and set him on the path made by his footsteps and ask him to again, follow so that it would be easier for him. This was repeated several times.

I think of those brave men and women, the first pioneers who trekked across our country without a map, and with only hope. Hope for a new life. Hope for better times. Hope for adventure.

It had to have been tough going. There were no roads. There were no paths. Lewis (no relation that I am aware of) and Clark blazed the trail westward. They had to make their own way. There was sickness and injury. That can be said about many of the wagon trains heading out that way. The Donner Party comes to mind.

I think what has stayed with me is that sometimes it is easier to just follow along. It is more comfortable and as I said, easier. But there are those who are a bit adventurous, aren’t there? Most of the time, there isn’t any problem. There are mountain climbers galore. Deep sea fishermen. Explorers in this desert or that jungle.

Sometimes, however, that sense of adventure gets the best of us. We get caught in unexpected and unplanned events, situations, and circumstances.

Sometimes without knowing it, without thinking, we stray from the footprints of someone who has set the trail ahead of us. Sometimes we get stuck and call out for help and someone rescues us and puts us back on that path, in those footsteps.

Sometimes, we need that help, don’t we? It doesn’t make us weak to call for help. I think quite the opposite. It is the confident, the strong who recognize that help and guidance are needed.

I see that in some of the kids who walk the hallway who want to appear tough and strong and who don’t think they need the help they truly need. I see that in teachers who truly want to do better, but are afraid of being judged as less than.

And, I sometimes see it in myself as I try to do the right and good and proper thing, but sometimes get lost along the way. I don’t want to appear less than in the eyes of my colleagues or my supervisors. None of us want to be judged or looked upon as less than.

So sometimes, we flounder, we get lost, we get stuck and rather than asking for help, we stay floundering, we stay lost, we stay stuck. I repeat, it isn’t weakness to ask for help, to ask for guidance, to help us get unstuck. That, my friends, is strength. Something to think about . . .

My new book, Spiral Into Darkness is available for Kindle, Nook and in Paperback on Amazon and Barnes & Noble.

Photo Courtesy of Hugues de Buyer-Mimeure and Unsplash
Posted by Joseph Lewis at 10:32 AM