It’s that time of year again. For me and for almost all of my staff except for a few, the school year is over. Kids departed on their buses or rides about two hours ago. Much of my staff are putting the last touches on grades or cleaning classrooms, packing up this or that to take home for the summer. And I sit in the quiet of my office. And it is quiet.

Tomorrow, the seniors walk in the Commencement ceremony. It never gets old for me. Each class does it a little differently, but it is mostly the same each year. It’s tiring and nerve-wracking, but at the same time, satisfying and worth it.

I had gotten to know this little guy, a freshman, over the course of the year mostly through a healthy give and take rivalry over the Green Bay Packers and the Minnesota Vikings. On Fridays before a game or Mondays after a game, he or I would wear our team's jersey, catch each other and poke fun at each other. During soccer, we’d talk and he’d ask if I was going to go to his game. So I did. More than one.

One day last week, he wandered into the cafeteria before school and looked out of sorts, kind of down. I asked him what was wrong and he said he had to change travel soccer teams. He explained that the new team would be better for him, but still. We talked about it further and after, I asked him if he had any big plans for the summer. He said he and his family have a time share near the beach and were going to spend a week there. I mentioned that my wife and I were looking into renting something in South Carolina near the beach because we were thinking that might be an area we’d move to after retirement.

This seemed to stun him. He was shocked, but more than that, he seemed hurt. Ethan said, “I don’t want you to retire.” I told him it would be a while before we do and he repeated in a quiet voice, “No, I don’t want you to retire.” I didn’t know quite what to say, but I managed a, “Well, how about when you’re a senior, we leave together.” He looked down at his shoe, looked back up and said, “Okay.”

That was one of the nicest moments this year among many. It warmed my heart to think that somehow, some way, I had managed to forge a relationship based upon a football rivalry and a mutual love of soccer.

We Never Know the impact our words or actions can have on someone. We move around in our world and we rub elbows, exchanged bits of conversation, a laugh or two and move on to something and someone else. From our vantage point, fairly innocuous, rather bland if not innocent.

We might lose it with someone. We might use words that cut to the heart and soul of someone and they end up crawling off to a corner to lick their wounds or bleed to death. And we might never know it. Pride, after all. We move on, he or she does not. We think it’s over and done, when for that individual- a kid, a colleague, a loved one- it cements feelings of inadequacy, hurt, failure, loneliness, “not good enough” and no ability or talent or strength to improve or do better next time.

Instead of choosing the most hurtful thing to say, we smile, nod a head and move on before we do any lasting damage. Instead of belittling someone behind his or her back, we walk away or better yet, steer the conversation away. Instead of piling on the hurt or degradation or humiliation, we take time to build up, to encourage, to foster hope and promise.

Honestly, I reflect back on my interactions with Ethan and I don’t see much to have caused him sadness and disappointment, even hurt when I told him that someday I might retire. A smile in the morning. A tease or two. A game or two. But somehow, in some way, I made a difference in that kid’s life. I wonder, how many other kids I . . . we . . . might have done that for or to a kid or kids in both good and bad ways. It happens and I’m sure it happened. But We Might Never Know, will we? Something to think about . . . 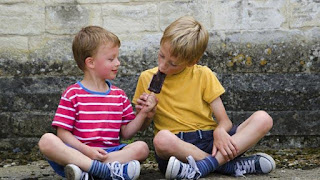 My book, Caught in a Web, will be $.99 from 6.21.18 – 6.23.18! It’s a limited time but the eBook (Kindle and Nook) will be available at this site: https://www.amazon.com/dp/B07CKF7696 It has received some tremendous reviews that I’m proud of, but they are also humbling. So those of you who have read it, thank you for passing on the positive vibes.

Amazon at: http://www.amazon.com/Joseph-Lewis/e/B01FWB9AOI /
Posted by Joseph Lewis at 3:01 PM