When we first moved to Virginia ten years ago, Hannah and Emily began a campaign. Kim and I would find a picture of a Golden Retriever stuck on the bathroom mirror, on the refrigerator door, sometimes in the refrigerator itself. The hints were not so subtle.

And then there were the conversations, the negotiations, the pleas and the begging.

Got to admit, I’m a sucker. I’m a softy. They had me and they knew it, though I didn’t let them know. More problematic was that Kim knew, although I falsely proclaimed otherwise. She knew me too well and so did the kids.

We met this lady in a strip mall parking lot. She dropped off a quiet, gentle Golden Retriever she or someone had named Baby. We didn’t like the name and settled on Bailey because it sounded close and we didn’t want to confuse her. Kim and I took one look at her and thought she might last a week or two. We could count her ribs and, she was just too quiet. Not normal. No jumping. No real movement from her. She climbed into the backseat, laid down and was a perfect passenger the entire trip home.

Once home, she did more of the same. She camped out in the living room on one of the couches. She might wander around the house exploring her new digs. And it wasn’t until about the sixth week that Bailey actually barked. Scared the hell out of me! Probably all of us. Up until then, we thought she was incapable.

Instead of Bailey, we could have called her Tigger because she had a habit of bouncing up and down to get our attention. And I don’t know what it was about Hannah, but Bailey insisted on sitting on her lap. Not laying down, mind you, but actually sitting prim and proper.

When we got Stella, another rescue dog like Bailey, Stella came not liking men at all. That hasn’t changed even after three years. And when Stella would bark at me, Bailey would insert herself between the two of us as my fearless protector.

Wouldn’t eat. Wouldn’t drink much. Struggled moving especially on our tile floor. Stairs and steps became mostly unmanageable. It hurt us to see her like that.

And in Bailey’s way, she never complained. At the end, she didn’t want to be anywhere we weren’t. That was okay with us. More than okay.

Two trips to the Vet and one to the Animal Hospital . . . Cancer.

An ugly word for such a beautiful dog, still in many, many ways, a puppy. Our Miss Bailey, as I liked to call her. A member of our family- now and forever- just as Sherlock was before her.

In the end (a fitting phrase, if not a painful and ugly phrase), we decided as a family that none of us wanted Bailey to suffer. We didn’t want Bailey to be in any more pain. She didn’t deserve that. She was too good of a companion, too good of a friend. Bailey was . . . and is . . . family.

So a shot was given, a sedative, to put her asleep. Followed by another injection. And Bailey was no more than a memory, a warm place in my heart, in the hearts of Kim, Hannah and Emily. Now racing around somewhere with Wil and Sherlock. The three amigos. Together. No more pain.  But lots of love. Still lots of love. Always lots of love.

With hearts full of love and wonderful warm memories . . . Bailey. 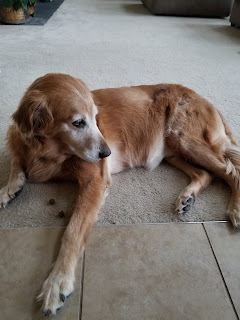 I have been really blessed with some wonderful reviews on my new novel, Caught in a Web. Best Thrillers wrote: “The Bottom Line: This important, nail-biting crime thriller about MS-13 sets the bar very high. One of the year’s best thrillers.” You can read the entire review (rather short, but impactful) at https://bestthrillers.com/caught-in-a-web-one-of-the-years-best-conspiracy-thrillers/

Another review, from Diane Donovan, Senior Reviewer at The Midwest Book Review wrote: “As the investigators review relationships, affairs, and threats, they find themselves unraveling an ever-increasing web of deception as readers are carried into a thrilling underworld of gang violence and teen involvements which gradually lead to a resolution where characters may fudge on honesty, but tie up loose ends.

Characters are many, but are well-drawn; the action offers just the right blend of tension and intrigue; and detective story enthusiasts will especially relish the level of emotional inquiry which makes the characters both human and believable.

The result is an involving detective piece that probes the worlds of teens and gang members with an equal attention to precise, staccato details that flow smoothly into a story that creates a satisfying conclusion to all conundrums.” You can read the entire review, again fairly short, at http://www.midwestbookreview.com/mbw/may_18.htm#donovan

So far on Goodreads, Caught in a Web has received ratings from 78 individuals and has garnered a 4.33 out of 5. Nice return for only a few weeks in release.