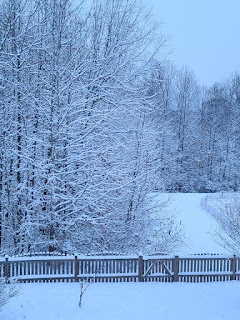 I grew up in Wisconsin, so I’m used to changes of the seasons. I’m cognizant of weather changes as I can, sort of feel it in the air. On the older series, “Gilmore Girls” Lorelai could sense snow coming. It was her favorite season (though she liked them all), and she loved the first snowfall.

I remember as an elementary kid anticipating and waiting for that first snowflake to float down from the heavens. It was magical. One, then ten, then hundreds, then . . . Snow covered the ground, the bushes and the trees. It wasn’t fussy where it landed. It just came and spent its time wherever it wanted.

I remember some really great sledding hills as a kid. In West Bend, they’d block off a street and we’d rocket down that hill into the baseball diamond at Regner Park. Behind our house was a cemetery above a hill. At the bottom of the hill, my brother, Jeff, and I built a little lift so when the sled or toboggan hit it, we’d sail up in the air and land with a thud. The more air, the better the ride was. We’d use cardboard boxes in the fall when the tall grass turned brown and was particularly slippery. That same lift didn’t feel all that great without the snow to cushion the landing.

Snow also meant ice and ice skating. We’d grab our skates and head to Regner Park with friends. Play ‘crack the whip’ which was murder if you were on the end and not a great skater. Tag, Pom-Pom-Pole-Away (that’s what we called it, and I think that’s how it’s spelled) where they’d call out your name and you’d try to break through arms held together. If you did, you’d bring back someone to your side of the ice. If you didn’t, you were on the opponent’s side of the ice. Steaming cups of hot chocolate with marshmallows, hoping you wouldn’t burn three layers of skin off the roof of your mouth or tongue, and lose your sense of taste for two days.

As a kid, snow was magical. I see pictures of friends’ children playing in the snow. I remember those days with our own kids. Wil was always the daring one. Hannah’s approach was a bit more cautious. Emily thought that if Wil could do it, so could she- size and age be damned. And Kim and I would watch and laugh and hope they wouldn’t damage themselves beyond repair.

As adults, we’d race to the store for bread, milk, eggs, and toilet paper in case we’d end up housebound. We’d worry about power going out, cars getting stuck, and of course, the sometimes back-breaking shoveling that came after a particularly heavy wet snow.

Funny how perspectives change with age.

And, after it snows, it sits on the ground and begins to melt. The white turns gray or black. Grass pokes through in spots. The yard turns muddy and sloppy. And then there is the refreeze where what was melted then turns to ice, making walking and driving hazardous.

The newness becomes old. The pretty turns dreary if not ugly. The sledding hill becomes, well, just another hill. One of dirt or asphalt.

All things change. Seasons come and go. Years pass us by. What was once new and bright and shiny, turns old and faded. It is life, after all. Minutes to hours. Hours to days. Days to weeks. Weeks to months to years. Instead of looking too far into the future, look to the present for all that life offers us. Live in it. Relish those small meaningful moments. The laughter. The rosy cheeks. The smiles. The wonder. The excitement. Newness does become old, but it does not have to change or sadden our heart, does it? Something to think about . . .

Some recent posts include:

-     A Snippet from Spiral Into Darkness

-        The Book Description and Book Trailer for Caught in a Web

Other ways you can connect with me on Social Media:
Twitter at @jrlewisauthor
Facebook at: https://www.facebook.com/Joseph.Lewis.Author
Amazon at: http://www.amazon.com/Joseph-Lewis/e/B01FWB9AOI /
Two More Five Star Reviews for my book, Betrayed:
“Another great psychological thriller from Joseph Lewis! He is able to draw you into his characters’ lives and keeps you turning pages until the end! I can’t put the book down once I start reading! Love the relationships he drafts in this blended family and the real ness he brings to his characters.” Sharon
“Lewis handles delicate and potentially troubling subject matter with skill and sensitivity. Betrayed is the best book of Lewis’ thriller series. It is extremely well-written; I wasn’t able to put the book down. It is suspenseful, exciting and has a surprising ending.” Thanh
Betrayed: A Literary Titan Silver Book Award Winner!
A late-night phone call, a missing kid, a murdered family, but no one is willing to talk. A promise is made and kept, but it could mean the death of a fifteen-year-old boy. Seeing is not believing. No one can be trusted, and the hunters become the hunted. https://amzn.to/2EKHudx
Spiral Into Darkness: Named a Recommended Read in the Author Shout Reader Awards!
He blends in. He is successful, intelligent and methodical. He has a list and has murdered eight on it so far. There is no discernible pattern. There are no clues. There are no leads. The only thing the FBI and local police have to go on is the method of death: two bullets to the face- gruesome and meant to send a message. But it’s difficult to understand any message coming from a dark and damaged mind. Two adopted boys, struggling in their own world, have no idea they are the next targets. Neither does their family. And neither does local law enforcement. https://amzn.to/2RBWvTm
Caught in a Web: A PenCraft Literary Award Winner! Named “One of the Best Thrillers of 2018!” by BestThrillers.com
The bodies of high school and middle school kids are found dead from an overdose of heroin and fentanyl. The drug trade along the I-94 and I-43 corridors and the Milwaukee Metro area is controlled by MS-13, a violent gang originating from El Salvador. Ricardo Fuentes is sent from Chicago to Waukesha to find out who is cutting in on their business, shut it down and teach them a lesson. But he has an ulterior motive: find and kill a fifteen-year-old boy, George Tokay, who had killed his cousin the previous summer. Detectives Jamie Graff, Pat O’Connor and Paul Eiselmann race to find the source of the drugs, shut down the ring, and find Fuentes before he kills anyone else, especially George or members of his family. https://www.amazon.com/dp/B07CKF7696
Book One of the Lives Trilogy, Stolen Lives:
Two thirteen-year-old boys are abducted off a safe suburban street. Kelliher and his team of FBI agents have 24 hours to find them or they’ll end up like all the others- dead! They have no leads, no clues, and nothing to go on. And the possibility exists that one of his team members might be involved. http://tinyurl.com/Stolen-Lives-J-Lewis
Book Two of the Lives Trilogy, Shattered Lives:
Six men escaped and are out for revenge. The boys, recently freed from captivity, are in danger and so are their families, but they don’t know it. The FBI has no clues, no leads, and nothing to go on and because of that, cannot protect them. http://tinyurl.com/Shattered-Lives-J-Lewis
Book Three of the Lives Trilogy, Splintered Lives:
A 14-year-old boy knows the end is coming. What he doesn’t know is when, where, or by whom. Without that knowledge, the FBI can protect him or his family. And he cannot protect himself. http://tinyurl.com/Splintered-Lives-J-Lewis
The Lives Trilogy Prequel, Taking Lives:
FBI Agent Pete Kelliher and his partner search for the clues behind the bodies of six boys left in various and remote parts of the country. Even though they don’t know one another, the lives of FBI Kelliher, 11-year-old Brett McGovern, and 11-year-old George Tokay are separate pieces of a puzzle. The two boys become interwoven with the same thread that Pete Kelliher holds in his hand. The three of them are on a collision course and when that happens, their lives are in jeopardy as each search for a way out. http://tinyurl.com/Taking-Lives-J-Lewis