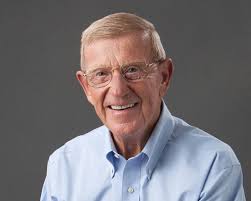 I surfed through channels yesterday killing time. Yes, I know that as a writer, I should have been chained to my laptop doing what I truly love to do, but I needed a break. Kim was out grocery shopping. The dogs were asleep, and the house was too quiet. I needed noise.

By chance, I happened to catch Joe Buck’s interview with Lou Holtz. I knew “about” him Holtz, but didn’t “know” him, and even after the interview, I have to admit I still don’t know him all that well. But I have to say that if I had the opportunity to sit and talk with someone for just a casual conversation, I would love to have the opportunity to speak to him.

He took programs that were at the bottom. Programs that were losers. Yet, he built them to be contenders and champions. As he said (forgive my poor paraphrasing), “Yes, I was always rebuilding, because if you’re winning, they keep you. The only jobs available are the ones that have poor programs.”

Pretty simple, I guess. But at the same time, not necessarily easy to accomplish. We like to make excuses. We like to shrug one or two things off, look the other way. Fear. Embarrassment. Too much time or trouble. Uncomfortable.

Yet, I look at what is happening in our country, in our world right now and perhaps there aren’t enough people willing to do (or say) the right thing. We leave it to others. Someone else. Or we might think it’s okay to “let it slide just this once” only to discover that we let it slide all too often. It becomes our way of life, the way we deal with each other, with ourselves.

#2: Do everything to the best of your ability.

Sometimes we’re just too tired. Sometimes we might not give a damn. Sometimes we think to ourselves, “It is good enough.” Pretty easy to do. Feel that way enough, it becomes routine and pattern.

When I was in eighth grade, I won a silver medal in a science fair. The top three were invited to the Marquette University fair. I didn’t care all that much. Silver (or bronze, for that matter) was good enough. I didn’t like science. Music and English, yes. Science, not so much. But it was in the basement as we spruced up my project when Dad who told me, “If you do something, do it the best you can. Period.” My dad believed and lived by the same rule Holtz did. What’s with old guys anyway?

I believe it was perhaps this rule that turned Holtz’s teams into winning programs. He genuinely cared about each of his players from the first team star to the third team bench warmer. He cared. He showed it. His players felt it, saw it, and they responded to it . . . to him.

I have worked for supervisors and bosses who cared. They showed it. I felt it. I have also worked for supervisors and bosses who professed to care, but in reality, didn’t give a damn. You had to make them look good. You dare not make a mistake- big or small- for you will feel and know their wrath. You end up living and working in fear of doing the wrong thing, instead of living and working to do the right thing.

Do what is right. Do everything to the best of your ability. Show people you care.

Below is the cover design and the book blurb. Pretty excited about it. 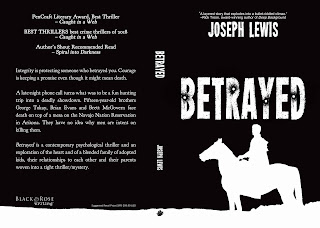 “A boy goes missing in Navajo Nation, a family is killed. Onto the next adventure for three brothers, including one who grew up there, to search for him. As to be expected, danger awaits, but these are not ordinary teens. They have faced harrowing situations before, and now they will rely on the skills and experience they’ve developed to get through this one.