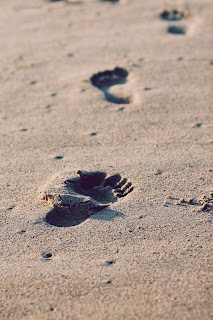 One of my favorite vacation destinations is the beach. I prefer the ocean, but honestly, I’ll take any beach, anywhere. I like the west coast because the sunsets are gorgeous, but the eastern seaboard is growing on me.

This past summer, my family spent a week on the beach. In the mornings before there were too many people, I would take a walk in the sand. Dolphins played in the water close by. Crabs scurried here and there. I think my footfalls disturbed them so they did their crab walk to the safety of the holes they had burrowed into the sand.

As I walked, I noticed that there were footprints both ahead of and behind me. I was not the first one to walk the shore, nor was I the last. Some of the footprints were small, others large. Some made a deeper impression than others. Some were small and light, barely into the sand at all, but though faint, still visible.

I wondered how many wanted a fresh start, a new beginning. I wondered who among us might allow for that rather than placing their past front and center so that a fresh or new start might not happen.

Small or large. Light or deep. Some fresh, some faded by time and the elements.

Lives change, and we change them. Directions are taken and paths are created by us whether we know it or realize it or not. That is the essence of life, all of life.

The thing is, each of us, and each of the kids we work with . . . the kids we see in the hallway or in the cafeteria; the kids who sit quietly in the classroom hoping against hope that no one notices them; the adult who stands in the mailroom or sits alone in a room; each of us has a story.

Each story is likely different from our own. Some stories are like a Disney movie where all is well and resolved at the end, while other stories read like a tragedy, and perhaps there is no satisfying ending and never will be.

And then there are those footprints . . . the ones that came before us and the ones who will come after us. The footprints we leave on hearts and souls and minds, treading kindly and softly, or roughly and hurtful. Footprints that might fade with time or last a lifetime. With each footprint, a story. A story added to the story already being played out. A story, good or bad, happy or sad. And our footprints only adding to the story.

What footprints will you leave behind? What stories will you help change  . . . or create? We have that power, you and I. We use it or abuse it each day. What is our choice . . . Today? Tomorrow? It is our choice, our action or reaction. Our words or lack of them. Our footprints. Something to think about . . .

I have been absent for about two months. I needed to recharge. I read. I watched movies. I wrote. I spent time with my family, both immediate and extended. I needed it, so I hope you don’t mind.

Diane Donovan, Senior Reviewer for Midwest Review had some wonderful things to say about Spiral Into Darkness:

“Joseph Lewis excels in building more than just a 'whodunnit' mystery. His is a novel of psychological suspense that weaves a 'cat-and-mouse' game into the equation of dealing with a killer who is much cleverer than anyone he's run up against in his career as a detective. Tension builds in an excellent, methodical manner as Lewis creates a scenario that rests firmly on not just the actions of all involved, but their psychological foundations. The result is a powerfully written work of psychological fiction that is highly recommended not just for mystery and police procedural readers, but for those who appreciate literary works well grounded in strong characters, plot development, and emotional tension. Great buildup, great insights, great reading!”