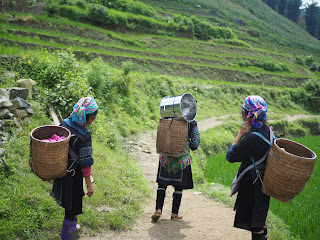 On December 12, 1993, I flew to Guatemala to pick up our adopted son, Wil. He was seven at the time. Hannah, though younger, was our first born and only six weeks old. Kim wasn’t ready to travel, though she wanted to, but she also knew she needed to stay with Hannah. In the course of six weeks, we went from being a family of two to a family of four. Because neither Kim nor I spoke much Spanish, our family quickly became tri-lingual: English, Spanish, and Charades. A whole lot of Charades.

When I was in Guatemala, on a Wednesday, our driver, Walter, (who was actually our bodyguard- I found out just before we left to go back home) took us on a trip to see the orphanage Wil lived in after he was taken from his biological mother, and then to Antigua Guatemala, a tourist spot. While the visit to the orphanage was bittersweet for me, sad for Wil, the visit to Antigua was a nice look at the culture.

On our way back, there were three women walking along the side of the road. One was older, one was middle-aged, and one looked to be a teenager. I had the impression that the three were related, possibly a grandmother, a daughter and granddaughter, though I could be wrong. Each carried a heavy load on their head and on their back.

I felt sorry for them. The load looked heavy. The day was hot and humid, and the road they traveled had an uphill incline. I told Walter that I felt sorry for them, and he patiently explained that this is done all the time. This is the way they live.

The way they live.

Our children carry burdens: social, academic, what might be taking place at home away from school, what they go home to, will they have enough to eat- anything to eat, a place to sleep, their future- if they have a future.

I think each of us has to realize that at some level, in some way, we are Carrying a Burden. Some heavy, some light. Some might come and go while others are forever and constantly with us. In all cases, the burden is real. It is there. And at times, there is no other focus and cannot be any other focus because the burden looms too large and is too painful.

So before we go off on someone, before we judge (do we really even need to judge?), let us realize that someone’s burden might be getting in their way. And if that is the case, perhaps we can choose to help lift that burden, help carry that burden so their own way might be made smoother, a little easier. And the nice thing is that in return, someone- perhaps that same person you had helped- will be there to help you with your burden. Because as I said, each of us is carrying some burden whether or not we see it. It’s there. Something to think about . . .

The Lives Trilogy Prequel, Taking Lives:
FBI Agent Pete Kelliher and his partner search for the clues behind the bodies of six boys left in various and remote parts of the country. Even though they don’t know one another, the lives of FBI Kelliher, 11 year old Brett McGovern, and 11 year old George Tokay are separate pieces of a puzzle. The two boys become interwoven with the same thread that Pete Kelliher holds in his hand. The three of them are on a collision course and when that happens, their lives are in jeopardy as each search for a way out. http://tinyurl.com/Taking-Lives-J-Lewis
Photo courtesy of Ives Ives and Unsplash