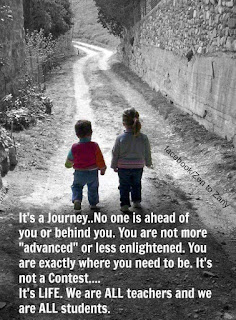 I remember way back in the mid- to late-eighties, I went out to eat with my brother Jim, his wife, Laurie, and their three kids. Their youngest, Kim, was in a high chair. The meal was brought out to us and Kim wanted her dad to cool it down for her.

Jim took the plate of food, in this case, a bowl of soup, and blew on it. Jim tasted it, made sure it was cool enough for Kim, and handed it back to her. Without any hesitation, Kim took a spoon and began eating it.

In a more recent time, my daughter, Em, went to a doctor and had a small procedure done. I didn't think it was a big deal, but to Em, it was. Em asked to hold my hand. Interesting, since she was in middle school at the time and I always thought of her as fairly tough. But, I held her hand and all went well. We never spoke of it at that time or since.

Four years ago, Kim and I had to stand in front of a window at the coroner’s office to identify my son’s body. A large sheriff deputy stood next to me, while the assistant coroner stood next to Kim. Kim and I held hands.

I think trust and support are fairly similar in nature. We rely on one another when, at times, we can’t rely on ourselves. Sometimes it’s tough to admit that we need a hand, a shoulder, an ear, a caring presence. Even the strong ones among us need support from time to time (see my post, “The Anchor Can Drown” from 1-17-14).

Because even the strong among us need help from time to time. Every now and then, we might need someone to lift us, to be with us, to hear us out, or simply to be present with us. To be heard, to comfort.

Every now and then, we need someone to Take Our Hand and let us know that we aren’t alone, that someone has our back, and that someone will stand with us. Even the strong among us. Even you. Even me.

And the weak? The angry? The kid acting out, doing poorly, not paying attention, seemingly not caring, not listening, willing to lash out and argue? Yeah, them too. Fear and pain cause varied reactions. Fear and pain are never really the same from one to another. There might be similarities, but never really the same from one individual to another.

And I think, perhaps, that by Taking A Hand, not only do we help that individual, we end up helping ourselves. Kind of naturally, I think. Where there are two, there is strength. Where there are several, we are even stronger. So maybe by reaching out, either to help ourselves or to help someone else, we are, in actuality, showing strength. Something to think about . . .