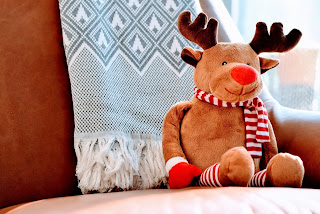 I’m sure you know the song and the story. Probably sang the song a million times and saw the movie every Christmas since you were born.

Rudolph, the red-nosed reindeer
had a very shiny nose.
And if you ever saw him,
you would even say it glows.

All of the other reindeer
used to laugh and call him names.
They never let poor Rudolph
join in any reindeer games.

Then one foggy Christmas Eve
Santa came to say:
"Rudolph with your nose so bright,
won't you guide my sleigh tonight?"

Then all the reindeer loved him
as they shouted out with glee,
Rudolph the red-nosed reindeer,
you'll go down in history!

So . . . here’s this reindeer with a red nose. Doesn’t seem like a big deal for you or me, right? In fact, it wasn’t a big deal to Rudolph until it was brought to his attention that he was “different” that he was “unusual” that he was “odd.” He was laughed at. He was called names. He wasn’t allowed to take part in any of the games the other reindeer played. Forced to leave or watch from afar. He was left out.

But then surprisingly, someone discovered he had a gift. More importantly, there was a need for this gift. It was foggy. The fog threatened Christmas and Santa’s ability to get to where he needed to go. Santa looked at Rudolph and said, “I can use you!” Santa decided Rudolph had a purpose . . . or at least his nose did. He would lead the other reindeer and guide the sleigh. Christmas was saved by Rudolph.

There are kids walking hallways, sitting in classrooms, trying out for a choir, a team, a play, or who eat in the cafeteria suffering the same fate as Rudolph each and every day. Each and every day. They might wander aimlessly around a mall or sit home on weekends because they have nowhere to go or no one with whom to do anything with. Only to come back on a Monday and do it all over again.

I’m sure some of these kids don’t know they have a gift. They’ve been told over and over how odd, how different, and how unusual they are that they’ve come to accept this oddness, this unusualness, this differentness as reality, as a fact. No one has taken the time to recognize a gift, a talent, an ability in the kid, but instead, either don’t take the time or don’t have the patience or worse, just dismiss the kid as odd and different and unusual.

I’m wondering, just maybe, if we might choose a kid or two . . . or six or seven . . . or each and every kid . . . and instead of being dismissive, we look for and help the kid discover the gift, the talent, the ability he or she might have, how different life might be for that kid. I wonder what kind of difference we might make for that kid, what kind of change we might make in that kid’s world . . . life. Turn each and every kid into Rudolph. Something to think about . . .

Photo Courtesy of Tim Gouw and Unsplash
Posted by Joseph Lewis at 12:10 PM