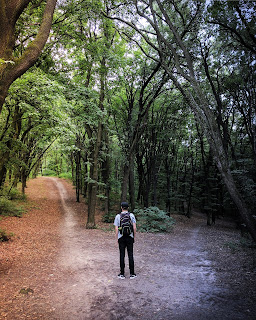 Each day and sometimes in each moment, we make Choices. Some are easy and require little, if any, thought. The alarm rings and we either hit the snooze or pop up out of bed to begin the day. When the appropriate time arrives, we jump in the car and head off to work, mostly using the same trusty route we’ve always taken. Pretty easy, really.

I marvel at the quarterback in football. In split seconds while defense breathes down his neck, the quarterback has to survey the field, see where the coverage is, who is open, weighs the percentage, and lets a pass fly. As an Ohio State football coach used to say, three things can happen on a pass play and two of them are bad: a drop or incompletion; an interception; a completion.

Like in football, those decisions affect not only the person who makes the decision, but also has an effect on those around that person: teammates, coaches, fans- all are impacted to a greater or lesser extent.

In support of the Empathy Project, I spoke to all English classes, teachers and various staff members about Choices and Consequences each block over two days. The first day for the presentations was my first day back from the trial for the driver who was part of a group of five responsible for my son’s death four and a half years ago. The trial took place in Chicago, Cook County specifically, and was spread over the better part of two weeks. It was exhausting, emotionally and physically, both the trial and my presentation to the kids.

You see, each of those five individuals in that black Toyota made decisions- all poor with little, if any, thought. If I were to boil it down, it would come to this: the driver who was thirty-one at the time handed a .40 caliber handgun with an extended magazine to a fifteen-year-old with the order to “Go wet his shirt! X him out!” That was the second decision the driver had made. The first was to listen to the fifteen-year-old who wanted to kill a gang rival, who he had described as a “valued target.” He not only listened to the fifteen-year-old, but stopped the car- decision number one, and then handed the boy in the backseat the handgun- decision number two, and then gave him an order- decision number three.

In all, nine shots were fired at a rival gang member. None struck him. But . . .

On that warm and beautiful Saturday afternoon in July of 2014, my son, Wil, took a break from working on a photo shoot and left his apartment to get some lunch and pick up a few items for his and his wife’s apartment. He was walking home and happened to be between the shooter, his partner, and the intended victim. It was surmised that Wil was hit with either the first or second bullet meant for the gang rival, and collapsed on the sidewalk. He later died at the hospital despite the best efforts of passers-by, EMTs and hospital staff. The damage to Wil was too great.

But as I explained to the kids in audience over those two days, the decisions, the Choices that were made had Consequences. No thought was given to the latter, only the former. And sometimes because no thought is given to the Consequences of one’s Choice, the result can cause lasting damage- not only to the person making the Choice, but sometimes there is lasting damage to those who are caught up in that Choice. These bystanders become the collateral damage of the Choices someone else makes. Not necessarily fair, but very real.

I think it is important to not only consider the Choices we make, but also consider carefully the possible Consequences of those Choices. Instead of acting off the cuff, instead of acting- or reacting- we need look closely at the Choices we make, the words we use, the indifference we show. And the sad fact is that no matter Choice we make- even for the right reasons- it can still cause hurt and damage to ourselves and to others. Something to think about . . .

I am happy to announce that the final edits to my new novel, Spiral Into Darkness, have been submitted to the publisher and the book was given the launch date of January 17, 2019. Of course there will be opportunities for preorder and as soon as I am given that information, I will publish them on this blog and on my author page on Facebook.

If you do read Caught in a Web or any of my other books, please leave a rating and a review. I would appreciate it. Thanks for this consideration!