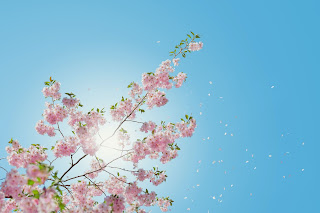 I’m not usually one to get all excited for Spring. Having lived in Wisconsin, I’ve seen too many ugly winters prolonged into late March and April. Snow turns dark and dirty. Slushy. Everything is wet, rather nasty. There is still a chill in the air almost to May. Not a fan.

However, since we’ve moved to Virginia, there is a difference. It gets warmer faster. Snow doesn’t last or have a chance at becoming nasty. The sun is brighter, and more of it, longer than in Wisconsin it seems. A few of our windows are open year-round, but now there are more of them open, at least during the day. The air smell fresh, clean.

I wandered around our yard yesterday and spotted buds on our rose bushes. A few on the trees, and those will become many in no time. We’ll begin mowing either this week or next.

This past week was spring break, and Kim and I used it to travel to Wisconsin to see her parents. We’ve not seen them in a year and a half, and phone calls, while nice, don’t match physical contact that a visit can bring. All of us had both Covid shots, and her nephew who lives with her parents had his second this past Thursday. We also visited my brother and his wife, who had their two shots also. We were safe. We’ve been conscious of our, and other’s, safety. Have to be.

We limited who we were around purposely, unable to see many we had intended to see. Her parents are elderly, but in fairly good health. We had to be responsible to and for them with how we interacted with others. Washed hands. Masks. You know the routine.

Show of hands . . . how are those New Year’s resolutions coming? Are you still working on them? I’m guessing there are more hands unraised than raised, mine included. I think that is because it is harder to redo oneself in winter all bundled up from the cold. It doesn’t matter if one works out in a nice, warm gym. It seems to be a bit tougher, taking more time and effort.

We had a dark, dark year. Covid, while not beaten back, is at least an arm’s length away. It seems to be retreating as many are receiving their shots and as many are following guidelines and safe practices.

Now, there are more people- young and old- out walking or jogging or riding bikes. There seems to be more smiles, more talking taking place. Perhaps, people are happier, but that could be my imagination.

Spring brings us hope, and besides love, one cannot exist without hope. Hope leads to faith. Hope leads to belief in oneself and in others. Hope gives us courage to take on that which we might not in winter.

Perhaps we can use this time, Spring, to move forward with purpose, with energy, and with hope. So much hope. There is possibility and promise in Spring that isn’t there at other times of year. Let’s use it for the better. Let’s use it for each other, for ourselves. Let’s embrace the opportunity, the beginning, the chance. The hope. Something to think about . . .

Great News!!!!!
I signed a 4 Book Contract with Black Rose Writing to Re-Issue the Lives Trilogy and Prequel! I am thankful to BRW for their continued belief in me and in my writing. This past week, I re-edited all four books, Taking Lives, Stolen Lives, Shattered Lives, and Splintered Lives. I will keep you posted as to when they might be available for purchase on Amazon and on Barnes and Noble.
More Great News!!!!!
I signed a contract with Black Rose Writing for my new book, Blaze In, Blaze Out that will be published January 6, 2022! Like the others, it falls in the thriller/mystery/crime genre, but this time around, it features my trio of cops: O’Connor, Eiselmann, and Graff. It will be more cops than kids, though you will always have a visit with the Evans Family! I will give you updates on when it will be available for preorder, as well as provide snippets from the book on my author website and Facebook.
Last Bit of Great News!!!!!
During a recent promotion, Betrayed, earned a Best Sellers Rank in Traditional Detective Mysteries on Amazon earning a high of #8 in Kindle Store (See Top 100 in Kindle Store)
#1 in Traditional Detective Mysteries (Books)
#1 in Traditional Detective Mysteries (Kindle Store)
#8 in Crime Thrillers (Kindle Store)
So far, Customer Reviews: 4.2 out of 5 stars with 43 ratings. I’ll take it!

On it, I talk about writing. I introduce characters from my books. I release snippets from those books. I let you in on any interviews I have done. I will let you know of any events coming up for books sales and signings. Mostly, it is my way of reaching out to you so that you get to know my author side of life. You can find it at: https://jrlewisauthor.blog/

Other ways you can connect with me on Social Media:

Twitter at @jrlewisauthor
Facebook at: https://www.facebook.com/Joseph.Lewis.Author
Amazon at: http://www.amazon.com/Joseph-Lewis/e/B01FWB9AOI /
A Five Star Review for my book, Betrayed:
“Having read all of Joe's books this is my favorite. I truly couldn't put it down. It was exciting to watch how his characters continue to grow up and develop in Betrayed. Although I suspect it could be read in isolation, it is so much better having read all of his previous books. It's a fast read that keeps you eager to turn to the next page. Thanks for reminding us that the word family can be defined in so many ways and most importantly that all kids, regardless of age or background deserve to be loved!”  – KB
A Four Star Review for my book, Betrayed:
“The action keeps you reading and the emotions get you thinking on all and many things in life. Tough times and Friends.” – Jhari
Betrayed: A Literary Titan Silver Book Award Winner! A Reader's Ready Recommended Read Award Winner!
A late-night phone call, a missing kid, a murdered family, but no one is willing to talk. A promise is made and kept, but it could mean the death of a fifteen-year-old boy. Seeing is not believing. No one can be trusted, and the hunters become the hunted. https://amzn.to/2EKHudx
Spiral Into Darkness: Named a Recommended Read in the Author Shout Reader Awards!
He blends in. He is successful, intelligent and methodical. He has a list and has murdered eight on it so far. There is no discernible pattern. There are no clues. There are no leads. The only thing the FBI and local police have to go on is the method of death: two bullets to the face- gruesome and meant to send a message. But it’s difficult to understand any message coming from a dark and damaged mind. Two adopted boys, struggling in their own world, have no idea they are the next targets. Neither does their family. And neither does local law enforcement. https://amzn.to/2RBWvTm
Caught in a Web: A PenCraft Literary Award Winner! Named “One of the Best Thrillers of 2018!” by BestThrillers.com
The bodies of high school and middle school kids are found dead from an overdose of heroin and fentanyl. The drug trade along the I-94 and I-43 corridors and the Milwaukee Metro area is controlled by MS-13, a violent gang originating from El Salvador. Ricardo Fuentes is sent from Chicago to Waukesha to find out who is cutting in on their business, shut it down and teach them a lesson. But he has an ulterior motive: find and kill a fifteen-year-old boy, George Tokay, who had killed his cousin the previous summer. Detectives Jamie Graff, Pat O’Connor and Paul Eiselmann race to find the source of the drugs, shut down the ring, and find Fuentes before he kills anyone else, especially George or members of his family. https://www.amazon.com/dp/B07CKF7696
Book One of the Lives Trilogy, Stolen Lives:
Two thirteen-year-old boys are abducted off a safe suburban street. Kelliher and his team of FBI agents have 24 hours to find them or they’ll end up like all the others- dead! They have no leads, no clues, and nothing to go on. And the possibility exists that one of his team members might be involved. http://tinyurl.com/Stolen-Lives-J-Lewis
Book Two of the Lives Trilogy, Shattered Lives:
Six men escaped and are out for revenge. The boys, recently freed from captivity, are in danger and so are their families, but they don’t know it. The FBI has no clues, no leads, and nothing to go on and because of that, cannot protect them. http://tinyurl.com/Shattered-Lives-J-Lewis
Book Three of the Lives Trilogy, Splintered Lives:
A 14-year-old boy knows the end is coming. What he doesn’t know is when, where, or by whom. Without that knowledge, the FBI can protect him or his family. And he cannot protect himself or his family. http://tinyurl.com/Splintered-Lives-J-Lewis
The Lives Trilogy Prequel, Taking Lives:
FBI Agent Pete Kelliher and his partner search for the clues behind the bodies of six boys left in various and remote parts of the country. Even though they don’t know one another, the lives of FBI Kelliher, 11-year-old Brett McGovern, and 11-year-old George Tokay are separate pieces of a puzzle. The two boys become interwoven with the same thread that Pete Kelliher holds in his hand. The three of them are on a collision course and when that happens, their lives are in jeopardy as each search for a way out. http://tinyurl.com/Taking-Lives-J-Lewis