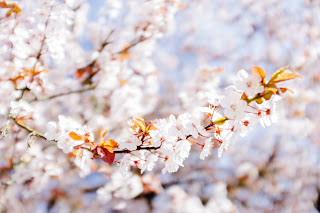 I like spring. It is a beginning, a start an awakening. It signals an end to the cold (mostly, not quite totally) and some of the dreariness that winter is sometimes known for. I get tired of being cold. It seeps into my body more so than it did when I was younger. I also find that the gray and the cold seeps into my heart and soul a bit.

We have our roller coaster of temps from day to day, but even the dips don’t seem as low as they have been. Yesterday, I noticed the flowering of trees on our street. I saw and heard a few more birds sitting on our back deck rails singing whatever song pops into their head. I think birds sing because they can, and that’s not so bad, is it?

Spring announces an awakening. What was once asleep and thought to be dead and gone, rises and grows. Witness the ghostly trees of winter budding and flowering. I see bags of mulch in my neighbors’ driveways and a few hearty souls on knees in their flower beds. I know the time will come when Kim drops hints about how we need to spend our upcoming weekends.

We plant seeds in each other, especially kids, don’t we?

Sometimes, we see the budding and the sprouting quickly. Sometimes, we wonder if anything will take root and grow. And at times, sometimes nothing grows despite all we try, all we do.

My brother, Jim, is four years older than me. I admire him for all he’s done, for all he’s been through. You see, Jim didn’t take to high school and I don’t think high school took to Jim. Part of it was because he followed Jack, who was the first boy in the family after five girls, and part of it was because he followed Kathy, who was the last girl of six. Tough shoes to fill.

He served his hitch and enrolled in college. It took. He graduated with honors with a double major in art and architecture. Who would have thought?

Jim is proof that kids get it, that people in general get it. Not necessarily on our time, but in their time.

Did you know that the seed of the bamboo plant doesn’t bud for five years after planting? Five years!

We can do better, you and me. We need to do better.

I ask you, too, to reflect on where you are with your words, your actions, the seeds you have been and are planting. Will they result in the buds and flowers you want to see and enjoy? Something to think about . . .

To My Readers:
My new book, Betrayed, will debut Nov. 12, 2020! It is a contemporary psychological thriller using some of the same characters from my previous work. It takes place on the Navajo Nation Reservation in northeast Arizona. I will post parts and passages on my author page on Facebook.

Book One of the Lives Trilogy, Stolen Lives:
Two thirteen-year-old boys are abducted off a safe suburban street. Kelliher and his team of FBI agents have 24 hours to find them or they’ll end up like all the others- dead! They have no leads, no clues, and nothing to go on. And the possibility exists that one of his team members might be involved. http://tinyurl.com/Stolen-Lives-J-Lewis
Book Two of the Lives Trilogy, Shattered Lives:
Six men escaped and are out for revenge. The boys, recently freed from captivity, are in danger and so are their families, but they don’t know it. The FBI has no clues, no leads, and nothing to go on and because of that, cannot protect them. http://tinyurl.com/Shattered-Lives-J-Lewis
Book Three of the Lives Trilogy, Splintered Lives:
A 14-year-old boy knows the end is coming. What he doesn’t know is when, where or by whom. Without that knowledge, neither he nor the FBI can protect him or his family.
http://tinyurl.com/Splintered-Lives-J-Lewis